I don’t often get excited about politics. I mean, look at the state of political discourse in this country! But when I see what’s going on in America, I sometimes think maybe we don’t have it so bad. The abyss that is current US politics obviously interests (maybe appals is a better word) late-night talk show legend Jon Stewart, who puts his own unique spin on it in Irresistible.

Running the show as screenwriter and director, Stewart has crafted possibly the best political comedy since Wag the Dog (1997). And just as Barry Levinson’s film tapped into the zeitgeist of the Clinton era, Irresistible keenly – and critically – observes these Trumpian times. In a sense, the film is a perfect metaphor for this particular political moment; because it neatly deflects its true intentions by pretending it’s something it’s not. 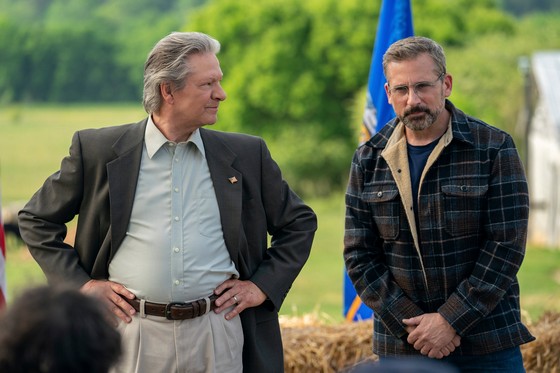 As with so many news stories these days, it all starts with a viral video. Returned veteran Jack Hastings (Chris Cooper) – known locally as “Colonel” – walks into a city council meeting in Deerlaken, Wisconsin. He steps up to the mic and pleads with Mayor Braun (Brent Sexton) not to pass changes that would disadvantage local immigrants. The video finds its way to Democratic Party strategist Gary Zimmer (Steve Carell), who immediately sees the potential. He heads to Deerlaken to convince Jack to take on the mayor in an upcoming election. Despite some initial reluctance, Jack agrees – but only on the condition that Gary personally run the campaign. Swayed perhaps by outstanding local pastries and Hastings’ attractive daughter Diana (Mackenzie Davis), Gary commits.

Even so, Jack is a long-shot at unseating the longtime Republican mayor. Gary’s efforts at raising Jack’s profile initially go remarkably well. But when Braun responds with a huge billboard in the centre of town, it seems he’s not going to take this upstart campaign lightly. Things get even more serious when the Republican Party sends their own brilliant strategist, Faith Brewster (Rose Byrne) to oversee Braun’s run for re-election. Soon, the gloves are off.

It doesn’t take much to see that Deerlaken is intended as a microcosm of America. What Stewart does though is far more clever than that. He weaves a parable for the times with subtlety and wit, perceptively taking aim at both sides of US politics. And just when you think you know how his story’s going to end, he pulls the rug out with a massive twist. I didn’t see it coming, and I doubt many others will. But it’s just about perfect.

Irresistible’s other big selling point is that it’s actually funny. Really funny. Belly-laugh funny. Stewart is a comedian, so he should know funny when he sees it, but he really hits the mark here. The “alternate endings” just before the credits are a fine example. Oh, and remember to sit through the credits, as a small but important sequence about half way through them puts everything into perspective.

After a series of dramatic movies, Steve Carell (Vice) returns to comedy with a bang as Gary. He manages to find the humanity in a character who could so easily have been a caricature. Rose Byrne (Like a Boss) provides plenty of frisson as the fiery Faith. Chris Cooper (Little Women) adds a grace note to the film as the salt-of-the-earth Jack; and Mackenzie Davis (Terminator: Dark Fate) gives an assured performance as Diana. The very strong supporting cast includes Topher Grace, Brent Sexton and Natasha Lyonne.

Despite my aversion to politics, I ended up loving Irresistable. This is an important film with an important message – one that has resonance well beyond the US. But more than that, it’s engaging, intriguing and just plain fun.