I lost track of the Terminator franchise long ago. I think it was after Terminator 3: Rise of the Machines (2003). And since that film logically tied off the loose ends, I was comfortable with it finishing there. But then we had the weak and divergent Terminator Salvation (2009) and Terminator Genisys (2015). I’d stopped caring though, so they barely made a blip on my radar. Seems many felt the same, as producer James Cameron and director Tim Miller have basically hit the reset button with Terminator: Dark Fate. 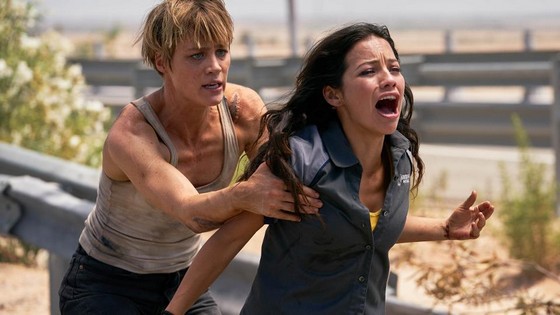 This is essentially a sequel to Terminator 2: Judgment Day (1991). So the franchise is in effect pretending the other films made since 1991 don’t exist. Filmmakers did the same thing with the Halloween franchise recently. Whether that’s a smart move or not is really beyond the scope of this review. No doubt it’ll be debated endlessly by fans. So I’m going to approach this as a stand-alone movie that taps into the Terminator lore.

On that count, it pretty much succeeds. It gives you everything you want from this kind of movie – lots of action, lots of CGI, a few wisecracks and Arnold Schwarzenegger. What could go wrong? Well, basically the script; which features plot holes you could fly a Globemaster through and heavy use of cliched dialogue.

The film opens with a throw-back to Judgment Day before moving to contemporary Mexico City. There Dani Ramos (Natalia Reyes) is going about her job in an auto factory. Little does she know that an unstoppable killing machine known as a Rev-9 (Gabriel Luna) has been sent from the future to terminate her. But luckily a shadowy figure from the future has also sent Grace (Mackenzie Davis) – a tech-augmented human – to protect her. Grace’s initial attempts to save Dani from the Rev-9 meet with little success. The pair are in a tight corner, trapped on a Mexico City freeway. But a timely intervention by Sarah Connor (Linda Hamilton) saves the day. But she can only slow the focused killer. With Grace and Dani in tow, Sarah heads for the only place that offers hope – a site in El Paso from which she receives her instructions.

The screenwriting team consists of six individuals led by David S. Goyer (The Dark Knight Rises) split between story and screenplay. Their output is muddled. The film tries to comment on the situation on the US-Mexico border, and broader themes surrounding migration and protection. But these sit uncomfortably in a plot that involves lots of running punctuated by big set-piece battles. As mentioned, the dialogue is pretty dire, and a lot of key moments defy belief.

Still, if action is your bag, this film offers some of the best. A mid-air battle with the Rev-9 is stunningly constructed, even if it owes a lot to the Mission: Impossible franchise. The Rev-9 itself features a “detachable” metallic skeleton in addition to its now-trademark melting-and-reforming abilities. And the climactic scene in a dam is spectacular, even if the outcome is kind of predictable.

Natalia Reyes (Birds of Passage) and Mackenzie Davis (Tully) make a fine pairing as the quarry and her protector. Diego Luna as the Rev-9 gets a few lines but mostly just has to look menacing and run a lot. But let’s face it, Linda Hamilton and Arnold Schwarzenegger are the main drawcards here. Both have changed a lot since 1991, but Hamilton in particular exudes a kick-ass energy that perks the film up.

Terminator: Dark Fate is one for the fans. If you love the Terminator franchise, you’ll probably enjoy this film. If like me you’ve lost interest, you’ll need to take it with a grain of salt. It’s still an entertaining enough diversion – if you’re prepared to overlook its many flaws.