Anyone who has ever had a newborn in the house will immediately relate to Jason Reitman’s Tully. This funny, affecting film delivers a compelling tale of motherhood in the 21st Century.

Of course, it also marks the reunion of Reitman with Diablo Cody. It’s now 11 years since their breakout hit Juno, and their only other collaboration since then was in 2011’s Young Adult (which also featured Charlize Theron, who takes the lead here). The years have mellowed Cody somewhat. Where Juno (and Young Adult to some extent) were all about finding yourself; Tully is about finding a way to care for others. 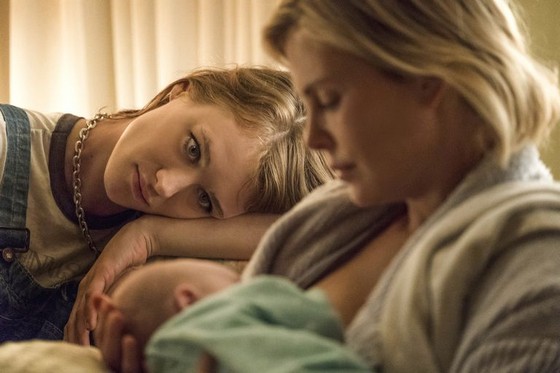 When we first meet Marlo (Theron), she’s heavily pregnant. She and husband Drew (Ron Livingston) already have two kids – precocious Emmy (Maddie Dixon-Poirier) and challenged Jonah (Asher Miles Fallica). Problems at Jonah’s school, and Drew’s demanding work schedule are already stressful enough. But Drew has becoming increasingly obsessed with video games, so even when he’s home, he’s not “there”. But at a pre-birth dinner party, Marlo’s brother Craig (Mark Duplass) extends a helping hand. He offers to pay for a “night nanny”; a carer who comes in at night to deal with the baby’s needs (other than feeding) so parents can get a good night’s sleep. When her baby arrives, Marlo is initially determined to stick it out herself. But after one particularly stressful day, she picks up the phone. That night, a knock at her door brings Tully (Mackenzie Davis) into her life. Soon, the two bond over more than just caring for a newborn.

While Cody has always had a knack for sharp observational humour (verging into satire or even ridicule), she moulds that into something more fulfilling in Tully. Sure, the quick wit is still there, but it’s tempered but empathy and reason. In several scenes, you think you know where Cody is going based on her earlier scripts. But she cleverly pivots off in another direction. When Marlo eventually does go where you might expect, it ends in an entirely unexpected way.

Without giving anything away, there is a twist in the film. If you keep a sharp enough eye out for the clues, you might guess it; but I confess I didn’t see it coming. Reitman’s sharp direction brings out the best in Cody’s script – and some fabulous performances from the cast.

Charlize Theron is incredible in the lead role. Her Marlo is about as far from Mavis in Young Adult as you could get. Then again, time and wisdom can do amazing things to a person. Theron inhabits the role, diving deep into the character and bringing out a performance of depth and honesty. Mackenzie Davis (Blade Runner 2049) is also excellent as the enigmatic Tully. Ron Livingston (Search Party) brings a suitably clueless aura to Drew. But one of the more striking performances here comes from young Asher Miles Fallica as Jonah.

Tully is a film of substance and intelligence. With its considerable charm and ample wit, it’s a film you can’t help but like. If you don’t have kids, you might wonder what all the fuss is about. But if you’ve lived with an infant, you’ll get exactly where this film is coming from.