On the night of 18 July 1969, a car driven by the last remaining scion of the famous Kennedy family careened off a bridge on Chappaquiddick, a small island just off Martha’s Vineyard. The political cost to Senator Ted Kennedy was great, but nothing like the devastation suffered by the family of Mary Jo Kopechne, who was killed in the crash.

Chappaquiddick the film delves into the story and adds its own embellishments. From my admittedly limited research, the film stays pretty true to the documented historical facts. What it lacks however is a bit of spark. 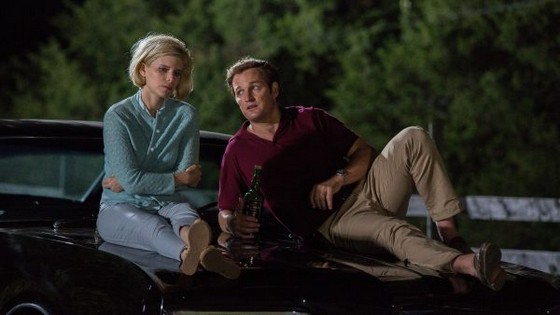 John Curran (who has a strong connection to Australia) directs Aussie Jason Clarke as Ted Kennedy. Taylor Allen and Andrew Logan have written an incredibly detailed script that hits all the high points of the unfolding drama. Their devotion to historical fact is admirable, but the trade-off is that it robs the film of some “air”. It’s a tricky balancing act; particularly when some of the participants are still alive.

Curran uses a fractured narrative to tell the story. While the film starts out conventionally, it soon flips back and forward in time to fill in some of the background details.

The film opens with Kennedy attending a party on Chappaquiddick for the “boiler room girls”. They were a group of young women who had worked tirelessly on the presidential campaign of Bobby Kennedy before his assassination. As things get a little wilder at the party, Ted finds himself talking to Mary Jo Kopechne (Kate Mara). Before long, they set out in his car. Driving too fast, Ted can’t make a sharp turn onto a bridge. His car spears into the water and overturns. Mary Jo is trapped, while Kennedy is thrown clear. Making his way back to the party, Ted enlists the help of his cousin Joe Gargan (Ed Helms) and friend Paul Markham (Jim Gaffigan). But the whirlwind of a police investigation and intense media attention lead to the situation spinning out of control – and Ted’s political ambitions along with it.

As someone with barely a passing interest in politics, I wasn’t all that interested in that dimension of the film. I did however find the machinations of the attempted cover-up fascinating. However, Curran concentrates a little too heavily on details without ratcheting up the drama. I guess since the history is pretty well-known (even outside the US) the outcome is never in any doubt. That means the film needs to provide some alternative source of tension. Curran tries to do so via the character of patriarch Joseph Kennedy (Bruce Dern), but it falls a little flat.

Jason Clarke (Winchester) impresses as Ted Kennedy. His New England accent is pretty good (though I think it may have “slipped” in one scene) and he brings a kind of melancholy weariness to the part. When you consider the history of the Kennedy family to that time, it suits. Kate Mara (The Martian) is also excellent as the devoted but deflated Mary Jo. Comedians Ed Helms (We’re the Millers) and Jim Gaffigan (Super Troopers 2) slip easily into the “straight” roles of Gargan and Markham; though Helms gets the best of the film’s few funny lines.

Chappaquiddick ends up being one of those perfectly serviceable historical dramas that hit cinemas every so often. It’s no world-beater; but if you’re interested in the story, this is a faithful – if rather stiff – telling of it.