As many of you will know, Mary Shelley was the author of Frankenstein, arguably the first modern horror story. But this film isn’t about Dr Frankenstein or his monster. Rather director Haifaa Al-Mansour focuses on the author herself. But like many recent biopics, it’s pretty stodgy fare.

Al-Mansour, the first recognised female filmmaker from Saudi Arabia, works from Emma Jensen’s script. The combination produces a feminist reading of Shelley’s life story. This resonates especially in the latter stages of the film, when Shelley tries to have her book published under her own name but meets stolid resistance. And while this feminist perspective is intriguing, the film suffers from some leaden pacing and dialogue. 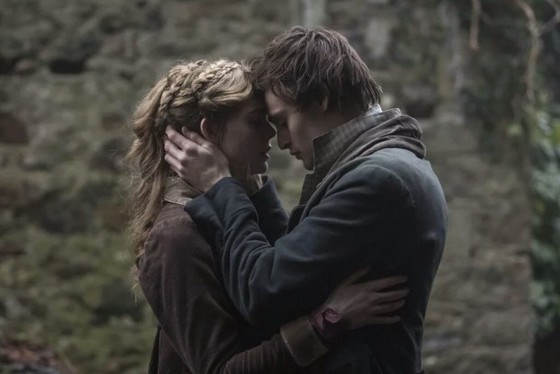 The film opens soon after Mary’s (Elle Fanning) 16th birthday. Mary has been raised alone by her father William Godwin (Stephen Dillane) following the death of her mother Mary Wollstonecraft soon after her birth. For the time, her childhood was unconventional. Godwin, a bookseller and political philosopher, raised the young Mary to think for herself, and not be bound by society’s strictures. He also educated her. When Godwin sends Mary to live with relatives in Scotland, she relishes the country life away from grimy London.

But then at a dinner party she meets Percy Bysshe Shelley (Douglas Booth). He’s a dashing young poet with an already-formidable reputation. Mary falls hard for him. When she returns to London, Percy follows her, ingratiating himself into the Godwin household. Their attraction can’t remain a secret for long. But when Godwin discovers Percy is already married (although separated), the young lovers’ relationship is in danger.

The central theme in Mary Shelley – that life informs art – is hardly revolutionary. The details of Mary’s life however are more interesting. The film touches on her relationship with her mother, the heartbreaking loss of a child and her ostracism from genteel society. All this is compelling stuff. But the arch dialogue in Jensen’s script is distancing. Some very florid moments don’t help. Neither does Al-Mansour’s languid approach to the material.

After the second act, you wonder how much misery the characters – Mary in particular – can endure. The dour, sombre tone is of course suited to the idea that Mary’s grim circumstances gave rise to her grim novel. But that doesn’t make the film any more watchable. Al-Mansour and Jensen also get most (though not all) the historical details correct.

Elle Fanning gives an intense and mostly compelling performance as Mary. Since her character experiences so much misery, there’s not a lot of scope for her outside the hopeful opening scenes. But Fanning dives into the role nonetheless. Douglas Booth is also fine as the self-centred Percy. Stephen Dillane doesn’t get much chance to liven things up as the dour Godwin. What relief there is comes from Bel Powley as the bubbly Claire Clairmont; and Tom Sturridge as the rakish (but awful) Lord Byron.

I must admit I found Mary Shelley hard going, especially in the extended middle section. But if you like your historical dramas detailed, accurate and grim, then should be for you.