This heart-warming film is the third – and final – film in the popular series about the adventures of a boy and his dog in the beautiful Pyrenees. Belle & Sebastian was based on the popular book by actress Cecile Aubry. The first film in this series was released in 2013. It introduced us to the plucky six-year old protagonist Sebastian and his friendship with sheepdog Belle. that film took place in 1943 when the Nazis occupied France. The second film, sub-titled The Adventure Continues, hit cinemas a couple of years later. Belle & Sebastian 3 is set in 1948, a couple of years after the end of the war when life has returned to normal for the folk in the picturesque village of Saint-Martin. And the story is sufficiently self-contained; so it’s not necessary to have seen the first two films. 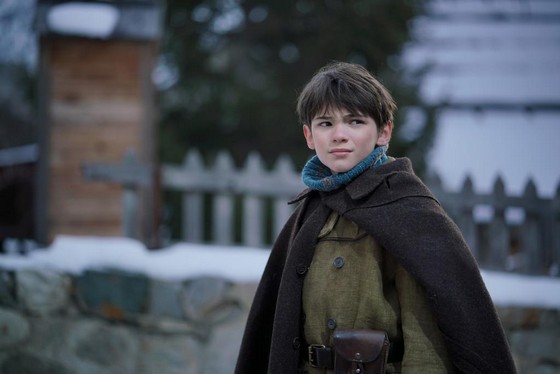 Sebastian (played again by the appealing Felix Bossuet) is now 12 and is comfortable living with his grandfather Cesar (Tcheky Karyo) and helping him on the farm. He goes to school because Cesar wants him to better himself and have more opportunities. Belle has just given birth to three puppies, so Sebastian also wants to look after them. His father Pierre (Thierry Neuvic) has just married Angelina (Margaux Chatelier), a former Resistance fighter and Cesar’s niece. Sebastian is happy for them until he overhears them talking about moving to Canada. Sebastian however wants to remain with Cesar become a farmer like him.

Then the sinister-looking Joseph (played by the film’s director Clovis Cornillac) arrives in the village. He claims  Belle belongs to him; and he has papers to prove it. He wants to take Belle and her puppies, who are all very valuable. Desperate to protect Belle, Sebastian runs away into the mountains with Belle and the puppies. That sets off a chain of events that initially test the bond between Cesar and Sebastian, but also places the youngster in danger. Joseph seems determined to use any means necessary to take Belle. In protecting Belle from Joseph, Sebastian also learns more about the dog’s origins.

Scriptwriters Juliette Sales and Fabian Suarez return for Belle & Sebastian 3. They’ve crafted an old-fashioned film of heart – and heart-pounding adventure. They wrote the two previous films as well, and their presence brings a continuity to the series.

The main cast also return for this third instalment, which further lends a sense of continuity. Karyo brings a gruffness to his role, but his Cesar also is sympathetic as he dispenses kindly advice and the occasional bit of wisdom to Sebastian. Bossuet has matured a little as an actor over the course of the three films and his performance is less tentative. He brings a mix of courage and endurance to his performance as his character protects Belle. Cornillac also seems to relish the role of the menacing Joseph – dressed in black, smoking a cigar and perennially scowling, he comes across like a villain from the old westerns.  Andre Penvern brings some comic touches to his role as Urbain, the town’s hapless mayor.

This is the second feature for director Cornillac, a veteran actor turned filmmaker, whose only other feature was Blind Date. He keeps things moving along at a nice pace. Thierry Pouget (who also shot Blind Date) provides a major highlight of the film via his gorgeous widescreen lensing. He captures the breathtaking beauty and grandeur of the snow-covered Pyrenees.

Belle & Sebastian 3 is a family-friendly film, although it does contain a few darker elements. The film deals with positive themes of heroism, friendship and family, and mixes heart-warming scenes with some humour. A lot of the film’s enormous appeal lies with the antics of the cute puppies.