Shakespeare-like high drama melds with anthropological study in Birds of Passage. Directors Cristina Gallego and Ciro Guerra (Embrace of the Serpent) skillfully examine how modern issues affect the lives of an isolated clan of indigenous people in remote northern Colombia. The results are shocking yet sadly familiar. 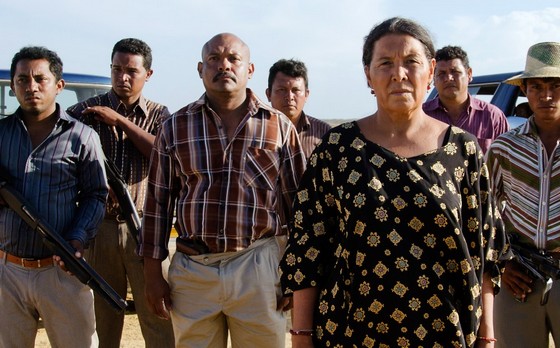 The people in question are the Wayuu. They live in the harsh Guajira Peninsula, where water is scarce and conditions can be harsh. But their isolation also means their language and customs have endured, rather than being assimilated into Spanish-speaking society. The film uses the Wayuu language pretty much throughout, giving it a unique cadence.

Birds of Passage opens with a spectacular scene in which Zaida (Natalia Reyes) comes of age. She dances the traditional courtship dance with Rapayet (José Acosta) a young man with big dreams. When the clan’s matriarch Úrsula (Carmiña Martínez) sets a seemingly impossible dowry, Rapayet isn’t deterred. With his friend Moisés (Jhon Narváez), Rapayet hits on a scheme to invest some profits made selling coffee in buying marijuana to sell to American Peace Corps volunteers. This windfall allows Rapayet to pay for the dowry and marry Zaida – gaining Úrsula’s grudging respect as a result. The weed comes from Rapayet’s relative Aníbal (Juan Bautista Martínez) and soon the two families are making more money than they ever imagined. But a serious error of judgment and related act of violence will have far-reaching consequences.

The story of Rapayet, Úrsula and their clan plays out almost like a version of Macbeth. It even has its own spectral visitor standing in for Banquo’s ghost. It’s also structured like a play, with five distinct “acts” (called “songs” in the film); framed by a kind of Greek chorus. But within that well-known framework, Gallego and Guerra delve into the customs, beliefs and rituals of the Wayuu people – and the dangers facing their way of life. The result is a fascinating and compelling film, full of symbolism and drama.

Since the film is mostly set in the 1970s, the costumes are, well, colourful (Moisés knows how to rock those white flares). The re-creation of the period seems authentic, even down to some rickety-looking vehicles.

Newcomer José Acosta largely carries the film as Rapayet. Although his manner seemed a little stiff at times, I suspect that was more a product of character development than anything else. Jhon Narváez provides a nice counterpoint as the easygoing Moisés. Carmiña Martínez and Juan Bautista Martínez are excellent as the heads of the respective families. Although an experienced actor, Natalia Reyes gets limited opportunities here, with her character being rather sidelined after the first “song”.

Birds of Passage is a film that will stay with you. Its combination of a powerful story, a unique perspective and strong performances make this somewhat niche film very worth your while.