Black is the New White, not to be confused with the television series Orange is the New Black, is about racism, class and identity. Humour is the principle vehicle used to highlight inequity, but perhaps not as you might have expected it.

Charlotte Gibson (Miranda Tapsell) is a hot shot young aboriginal lawyer who has fallen in love with an impoverished white experimental classical composer and cello player, Francis Smith (Tom Stokes). Three months later and the pair is engaged, but she is yet to tell her parents who have never set eyes upon him. All that is about to change when they meet up over Christmas at her folks’ swish holiday home.

Her father, Ray (Tony Briggs), is a former Labor politician who has used the system for personal advantage and as a result is an extremely wealthy man. Mum, Joan (Melodie Reynolds-Diarra), is the brains behind the bravado. Let’s just say that their first meeting with their future son-in-law doesn’t go according to plan.

Also arriving later is Charlotte’s designer sister, Rose Jones (Tuuli Narkle), and her husband, Sonny (Anthony Taufa), an Indigenous God-fearing former Wallabies’ captain. Bringing up the rear are Charlotte’s fiancé’s parents, Marie (Vanessa Downing) and Dennison (Geoff Morrell), from whom Francis is all but estranged. Dennison is an outspoken former Liberal minister who constantly butted heads with Charlotte’s father, while Marie is more than ready to spice up her life.

It is a charged environment with arguments aplenty and more than a few incendiary words thrown around … together with so much more. It is a time when chickens come home to roost and before it is over all will be laid bare. The scene is set and fine details of characters explained by a jaunty narrator (Luke Carroll), who even gets the audience up and dancing after interval.

Black is the New White lurches from laugh aloud funny to very silly, with unevenness in scripting and delivery. So, I really liked elements of the piece, but not so much others. I thought some of it was overwritten by Nakkiah Lui, which included unnecessary repetition of words. Still, there are some beaut one liners, slapstick and effective sight gags. I dare not spoil the surprises by going into further detail. 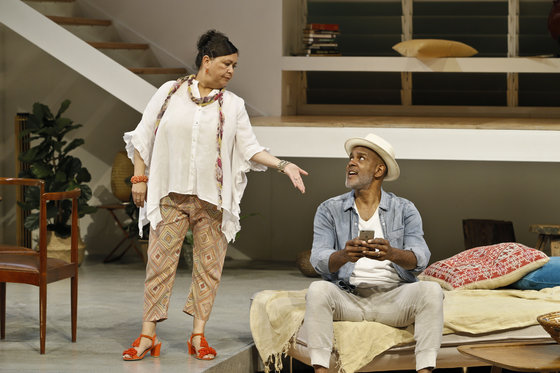 Suffice to say, the play takes a deliberate sledgehammer approach to the material and overall there is no shortage of shocks, laughter and hijinks. Best of the nine strong cast are son and father, as played by Tom Stokes and Geoff Morrell. Stokes, to me, is naturally comedic in his execution of pivotal scenes, while Morrell does bombast so very well.

A wide, open and lavish two-tier set design by Renee Mulder (who also designed the costumes) gives the players plenty of scope to work within. Director Paige Rattray has ensured we are treated to a largely pleasurable and decidedly fiery night of theatre. Black is the New White is playing at Southbank Theatre, The Sumner until 6th November, 2019.

I saw the first preview performance of the play.