Quite the epic, Little Women – directed by Greta Gerwig (Lady Bird) – is a moving adaptation of Louisa May Alcott’s award-winning novel. The story unfolds as the author’s alter ego, Jo March (Saoirse Ronan), reflects on her fictional life. 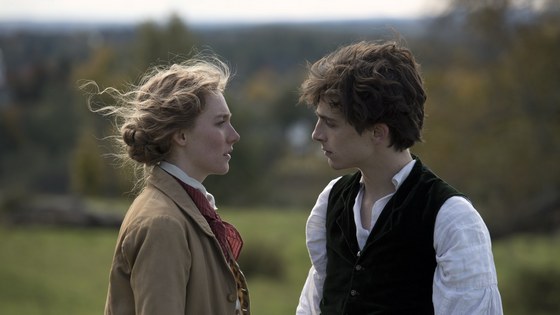 It is the tale of four young women – sisters Jo, a writer, Meg (Emma Watson), a wannabe actress, painter Amy (Florence Pugh) and pianist Beth (Eliza Scanlen) – out to live life on their own terms. While their father Robert (Bob Odenkirk) is off fighting in the war, they are brought up by their principled and caring mother Marmee (Laura Dern) and long-time housekeeper Hannah (Jayne Houdyshell). An ever-present force from their teen years is affluent layabout and neighbour Laurie (Timothée Chalamet), who is smitten by Jo and adored by Amy. Laurie’s kindly grandfather is the enigmatic Mr Laurence (Chris Cooper).

The March family may not be wealthy, but they are loving and close. The girls’ choices often don’t meet the approval of their wealthy and haughty aunt (Meryl Streep). When Jo leaves home to teach in New York she meets a man she’d like to think of as a colleague, Professor Friedrich Bhaer (Louis Garrel), who impresses with his expansive knowledge of literature and confounds Jo with his critiques of her work. Also making an impression as Jo’s publisher Mr Dashwood – a believer in popularism and happy endings to romance – is Tracy Letts.

There’s a lot to like and appreciate about the film, namely the screenplay, the adult characterisations, the period detail and the way the story is woven. By the latter I mean pivots back and forwards, with points of high drama appearing throughout, but not necessarily when you might expect them.

Saoirse Ronan Ronan is excellent in the lead, channelling the strength, independent spirit and dogged work ethic of Jo. Emma Watson is suitably nuanced as her pragmatic elder sister, who gives up her career ambitions for a family life. Florence Pugh also comes into her own as an artist whose heart is torn, playing second fiddle to Jo. Then you have the charm and empathy shown by Laura Dern as their mother and Chris Cooper as their gentlemanly neighbour. Timothée Chalamet does a good job of scene stealing when he’s on camera as the spoilt little rich kid.

I was also taken by the performance of Tracy Letts as the man Jo has to satisfy with her verbiage to help feed the family. He plays the publisher as a man who knows his mind, but who nevertheless has much to learn and respects Jo for her talent.

Professor Friedrich Bhaer may be far less gregarious than Jo (in fact her polar opposite), but too is captivated by this dynamic wordsmith and force of nature. Louis Garrel is measured and intelligent in his persona.

One thing I found difficult to reconcile was the same actors playing their characters seven years apart. That may be plausible if you are talking about the difference between mid 20s and early 30s or mid 30s and early 40s, but it didn’t wash for me when in this case they were young adults and then children. A few scenes in particular stood out for the wrong reasons. I speak of when the sisters were hamming up their girlie girlie antics and at one stage piling on top of one another.

That aside I cried like a baby in the second act as events came to a head.  My appreciation of what I was seeing and the way it worked its way into my psyche grew immeasurably.

So, all in all, Little Women is a largely pleasurable watch which will, not surprisingly, hold greatest appeal to the fairer sex – young and old. Rated G.