Boyhood was a very good film, but it was bloated. Last Flag Flying, by the same director, Richard Linklater, isn’t as good. Like Boyhood, it’s also distended, but still has its moments. 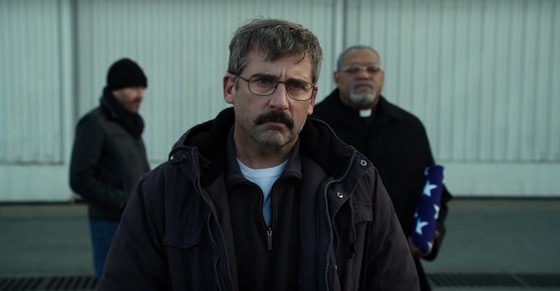 Three buddies who served in Vietnam together reunite after decades for one express purpose. In 2003, soft-spoken family man Larry “Doc” Shepherd (Steve Carell) surprises alcoholic former Marine Sal Nealon (Bryan Cranston) when he shows up at his bar in Norfolk, Virginia. Together they visit their formerly wild comrade-in-arms Richard Mueller (Laurence Fishburne) at the church where he’s now a pastor. Doc reveals that his son, a Marine, has been killed in Iraq. He asks his two former colleagues to accompany him to collect his son’s body and bury him. Along the way, they reminisce and come to terms with shared memories of the war that continue to shape their lives.

Last Flag Flying is an unofficial sequel to Hal Ashby’s The Last Detail (1973) starring Jack Nicholson. The 1973 film was based on a novel by Darryl Ponic-san; and he also wrote the book on which Last Flag Flying is based. He adapted it, along with Linklater, into the screenplay for this movie. I should add that the script veers significantly from the novel, particularly in terms of the characters’ shared experiences in Vietnam.

While I know you could say all movies are set up, this one feels decidedly manipulated for effect. I felt it was stage-managed. But that doesn’t mean it didn’t move me. Part of that was due to the high calibre of the acting talent, led by Bryan Cranston. He plays Nealon, the most colourful of the trio; who’s the epitome of contradictions. His character Nealon generally says exactly what’s on his mind because he doesn’t give a damn … but ironically he does.

I also quite liked the contrast that Laurence Fishburne offered as the pastor. Mueller’s controlled in his actions, but his frustrations with wild man Nealon that cause him to let down his guard. Carell plays against type as a man of few words who feels much.

For those seeking nostalgia, the trio purchase their first mobile phones in a sentimental sequence.

While watching Last Flag Flying, I went from liking it, to all but loathing it, and then back again. But one thing is for certain – a tad over two hours is way too long for a film with a relatively straightforward premise, notwithstanding a few twists along the way.