Geez, you think you know a guy! Whether you loved or loathed former US Vice-President Dick Cheney, Adam McKays’ new film Vice will probably give you new insight into this enigmatic figure. Oh, and it may just illuminate some recent history as well. 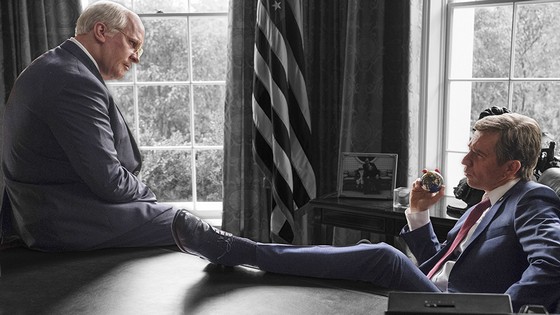 But the most important thing about Vice is that it’s fun. Although it’s basically the same length as McKay’s previous film, The Big Short, it feels much pacier. McKay eliminates many of the “dead spots” that plagued The Big Short. The result is a film that zips along; though perhaps it might miss some of the subtler nuances of character.

The film charts Cheney’s (Christian Bale) rise from rural bad boy to Washington insider to the ultimate power broker. His wife Lynne (Amy Adams) provides the impetus for that drive. Along the way, Cheney makes friends with some important and influential people, including Donald Rumsfeld (Steve Carell), Scooter Libby (Justin Kirk) and George W. Bush (Sam Rockwell). Along the way, Cheney’s story intersects with critical moments in US history – Nixon’s resignation, the end of the Cold War, 9/11 and the Iraq War.

No one in this film comes off as particularly likeable. Cheney is portrayed as a schemer motivated principally by greed. Lynne is a manipulative Lady Macbeth figure. Rumsfeld is a disagreeable hatchet-man and Bush is a bumbling fool. How true those portrayals are to real life is certainly debatable; but they work in the context of the film.

When McKay lets us into another side of Cheney, it comes principally via his daughter Mary (Allison Pill). When she comes out as gay, Cheney refuses to disown her, even though publicly he’s fighting against gay marriage (and thus, his own daughter’s rights). For the character, the dividing line between the personal and the political is clear and bright; making it easier for him to reconcile his public and private lives.

Christian Bale (Hostiles) – currently the poster boy for Method acting – portrays Cheney throughout with the help of a lot of prosthetics. This adds an authenticity to the film that couldn’t be achieved by having actors of different ages play him. And Bale delivers a bravura performance. Amy Adams (Arrival) is similarly excellent as Lynne, though (as seems to happen a lot) her character fades into the background later in the film. Steve Carell (Last Flag Flying) is brilliant as the rather sophomoric Rumsfeld. But my favourite performance here was from Jesse Plemons (Game Night) as Kurt. He serves as narrator; and he has a connection to Cheney, although it doesn’t emerge until near the end of the film.

Even though I’m not a particular fan of American politics, I really embraced Vice. This is a film for more than political wonks. It works as a character study and a chronicle of its times. But it’s also an object lesson in the mendacity of power, and in how corrupted politics has become.