Christian Bale returns to the western genre for the first time since the remake of 3.10 To Yuma in 2007. Hostiles also reunites him with director Scott Cooper, who put him through his paces in the gritty urban drama Out of the Furnace.

Taking place in 1892, Hostiles is a brutal Western that is set at the end of the Wild West era. It’s also something of a revisionist Western. It looks at the inherent racism of the time but also serves up a more sympathetic view of the treatment of native Americans who had lost much of their territory to western expansion. The film deals with themes of loss and reconciliation and its tone is more reflective at times. 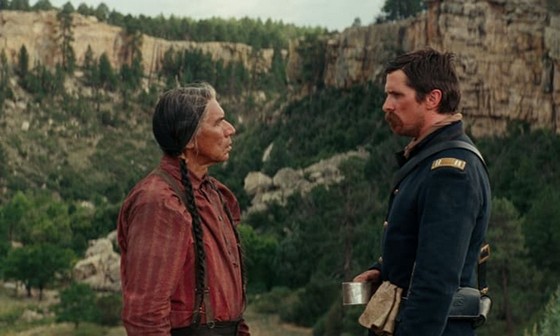 Cavalry Captain Joseph Blocker (Bale) is a war hero whose reputation was forged on the battlefields where he fought the Apaches and Cherokees. Colonel Biggs (Stephen Lang) orders Blocker to escort Yellow Hawk (Wes Studi), an ailing Cheyenne chief. Yellow Hawk is travelling from the isolated outpost of Fort Berringer to his tribal lands in Montana, where he will be allowed to die in peace. His family, including son Black Hawk (Adam Beach) and Black Hawk’s wife Elk Woman (Q’orianka Kilcher) join the journey.

Initially Blocker is a little conflicted by this duty. His past duties included hunting down Indians. And he’s disturbed by Yellow Hawk’s murderous activities before he was captured. But facing the threat of court martial, Blocker reluctantly agrees to undertake this one final assignment. Accompanying him on this mission are Corporal Woodson (Jonathan Majors); Lieutenant Kidder (Jesse Plemmons), a West Point graduate; Master Sergeant Metz (Rory Cochrane); and the young and inexperienced teenager Philippe DeJardin (Timothee Chalamet).

They have to across a harsh wilderness, where they discover that Indians are not the only hostiles to worry about. The mission is further complicated when the party encounters the widowed Rosalie Quaid (Rosamund Pike), whose family has been butchered by marauding Indians. The embittered and grieving Rosalie joins the party on their perilous journey, full of resentment towards her fellow travellers. But during the journey the former enemies begin to develop a deeper understanding of each other’s lives and the choices they have made, especially when they join forces to fight off a raiding party of vicious Comanches.

Hostiles is based on an unpublished story originally written by the late Donald Stewart. He was a screenwriter who wrote the scripts for Patriot Games and Clear and Present Danger. Within the broad framework of traditional Western tropes, Cooper addresses the darker history of the American west and the genocide of native American tribes. Hostiles is more in the vein of Ralph Nelson’s Soldier Blue, and the films of Anthony Mann or the Western stories of Larry McMurtry (like the epic Lonesome Dove).

Technical contributions are all excellent, and Jenny Eagan’s costumes reek of authenticity. The beautiful widescreen lensing from Cooper’s regular cinematographer Masanobu Takayanagi (The Grey) gives the film the look and feel of the classic Westerns of John Ford, who set many of his films amid the grandeur of Monument Valley. The film was largely shot outdoors in Arizona and New Mexico, but the harsh landscapes perfectly suit the film’s bleaker tone.

Cooper draws strong performances from his cast. Bale brings a stoic and brooding quality to his performance as the tortured Blocker, who, like John Wayne’s racist and vengeful Ethan Edwards in The Searchers, wears his prejudice like a badge of honour. His character undergoes the greatest emotional change during the course of the film as he rediscovers his basic humanity, which Bale manages to depict with subtle nuances. Pike (Gone Girl) has a feisty quality, while Studi (Geronimo) brings a quiet grace and dignity to his underwritten role. Ben Foster (Hell or High Water) brings a touch of menace to his role as Wills, a soldier accused of murder.