A Dog’s Way Home is a family-friendly and heartwarming animal adventure that combines elements of classics of the genre like Lassie Come Home, Homeward Bound, and even 2017’s A Dog’s Purpose. 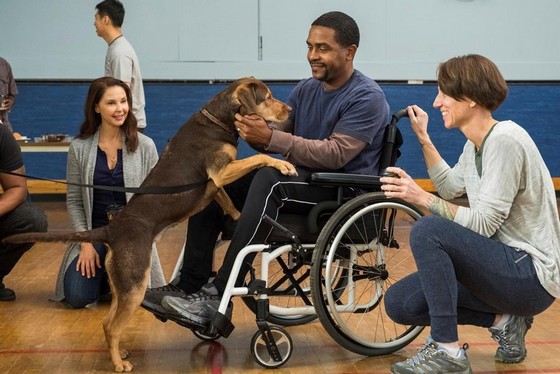 As a pup Bella was raised in the crawl space beneath a dilapidated house in Denver. She was rescued by Lucas (Jonah Hauer-King), who lived in a house opposite, and his girlfriend Olivia (Alexandra Shipp). Lucas lives at home with his single mother Terri (Ashley Judd), a former military veteran who works in the local VA hospital. Bella proves to have great therapeutic value for some of the traumatised veterans that Terri works with.

But then a run-in with a vindictive developer (Brian Markinson) sees Bella threatened by Chuck (John Cassini), the relentless and uncaring local dog catcher, who’s the villain of the piece. To save Bella, Lucas reluctantly sends her away to New Mexico to live with some friends. But Bella runs away and makes her way across a harsh wilderness to return home to Lucas. Along the way Bella touches the lives of many people she encounters during her dangerous cross-country journey. She even befriends an orphaned mountain lion cub.

Not surprising actually, as A Dog’s Way Home was written by W Bruce Cameron, who also wrote A Dog’s Purpose. He has adapted his novel to the screen in collaboration with Cathryn Michon, who co-wrote that film. A Dog’s Way Home also manages to work in some important themes like animal welfare, the plight of veterans and the homeless. It crams a lot into its 96-minute running time. The film is sentimental and manipulative.

Director Charles Martin Smith is a former actor (he appeared in American Graffiti and The Untouchables). He went on to establish himself behind the camera with films like Air Bud and A Dolphin’s Tale. Smith is familiar with the demands of working with animal performers. He augments their lovable antics and facial expressions through the clever use of CGI.

Here Bryce Dallas Howard gives voice to Bella’s thoughts, and her internal monologues give us insight into her perspective. The technique is not overdone, and thankfully no other animals in the movie talk. The ensemble cast features Edward James Olmos, Wes Studi, and Motell Gyn Foster as some of the people whose lives are touched by Bella during her journey.

This is a familiar and conventional narrative, but it’d be a hard heart indeed that wouldn’t be moved at some point by Bella’s incredible odyssey. The film has been beautifully shot by cinematographer Peter Menzies Jr (Peter Rabbit) who captures some gorgeous vistas of the American landscape. Mychael Danna’s score is also quite evocative.

A Dog’s Way Home will certainly appeal to animal lovers, and particularly dog lovers, and anyone who enjoys good wholesome animal action.