I’m not sure what’s going on with James Wan’s blockbuster Aquaman. This is a bloated Franken-movie that cobbles together parts of many – mostly better (*cough* Black Panther *cough*) films. Yet by the time the climactic final battle takes place, I found myself cheering for our hero. How does that happen?

As a director, Wan’s credits run mainly in the horror genre – Saw, Insidious, The Conjuring – so he might seem an odd choice to direct this big-budget superhero film. But he does a surprisingly good job with some limited material from a 7-person scriptwriting team led by David Leslie Johnson-McGoldrick. Most tellingly, he abandons the dour palette of previous DC-universe films and embraces colour and action. That, at least, is a refreshing change. 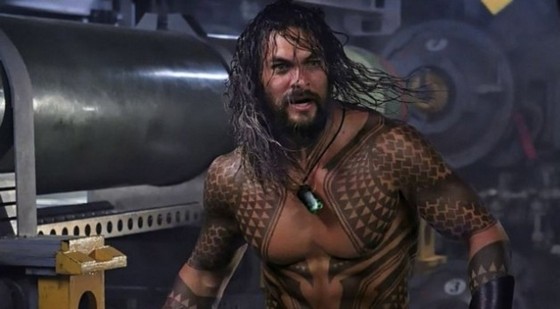 Aquaman is in fact Arthur Curry (Jason Momoa). He’s the son of a princess (Nicole Kidman) from the undersea kingdom of Atlantis and a “surface dweller” (Tamuera Morrison). Long story short, he’s kind of the rightful king of Atlantis but doesn’t have a lot of time for royal stuff. Mainly because he’s too busy taking down sub-stealing pirates like David Kane (Yahya Abdul-Mateen II), who will appear later in a different guise. Oh, and also because the stuck-up Altanteans hate “half-breeds” (check Harry Potter off your Aquaman bingo card here).

Anyway, Arthur’s younger brother Orm (Patrick Wilson) is now king and doing a pretty crap job of it. King Nereus (Dolph Lungren), the ruler of another undersea realm, convinces Orm to embark of a quest to unite the undersea world. That will in turn allow him to wage war on the surface dwellers. His attractive daughter Mera (Amber Heard) is part of the deal. But the self-reliant Mera and Orm’s vizier Vulko (Willem Dafoe) are having none of it. They secretly convince Arthur to challenge Orm for the throne. But of course, it was never going to be that easy.

For the most part, Aquaman plays out as a mish-mash of styles and ideas. As mentioned, the influences are many and include Indiana Jones, Jurassic Park and Lord of the Rings to name a few. Yet somehow Wan manages to steer this leaky boat well enough that I became invested in the characters. Well, actually I only really invested in Arthur; but hey, that’s probably more than this movie really deserved.

Aquaman of course was famously considered unfilmable (I mean, that was the underlying in-joke in the whole first season of Entourage). But Wan and his special effects team have done a pretty good job in recreating an underwater environment for the big screen. Sure, the CGI is obvious in a lot of scenes, but many others are spectacular. It also has a strong Australasian connection, though Wan, Kidman and Morrison; plus much of the film was shot in Australia.

Jason Momoa (Braven) literally flexes him impressive muscles as the title character. He also manages to get most of the best one-liners (see, his sense of humour is one thing that distinguishes him from the dour Atlanteans). He handles the action sequences (at least the non-CGI ones) with assurance. Amber Heard (The Danish Girl) is pretty one-note as the feisty Mera; but then most of the Atlantean characters never deviate from an oh-so-serious manner. Patrick Wilson (The Commuter) is sadly bland as Orm; while an unrecognisable Dolph Lundgren (Creed II) pops up as King Nereus.

Despite its many serious flaws, I actually had a pretty good time with Aquaman. It’s certainly a step forward by DC to broaden its appeal after some pretty dire movies previously (Wonder Woman being the obvious exception). This is a hulking leviathan of a film, but it does well enough to never totally run aground.