Comedies featuring strong women can be funny and risqué like Bridesmaids or patchy and disappointing such as Like a Boss. 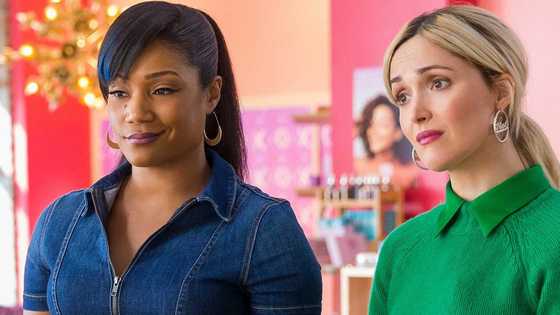 Best friends forever Mia (Tiffany Haddish) and Mel (Rose Byrne) are both happily single. They live together and one even puts toothpaste on the other’s toothbrush. They run their own small cosmetics company – a business they built from the ground up, but which is now in deep financial distress. And then a strange thing happens.

They get an overture from one of the industry’s titans, who is prepared to expunge all their debt and buy out half their company. Whether that be 51 per cent or 49 per cent remains a bone of contention. Of course, things are frequently not as rosy as they purport to be and Claire Luna’s (Salma Hayek) expectations and demands put serious strain on the relationship between these lifelong friends.

In reality, that is what Luna wanted from the outset because it cements her control. Let’s say the beauty business is about to get ugly.

Notwithstanding a couple of choice scenes, including a contentious one involving a baby, much of the supposed humour falls flat. Talking of that, unfortunately the film suffers from several flat patches during which you are desperately waiting for something to happen.

Like a Boss is what I call a try-hard picture. It tries too hard to have an impact and more often than not doesn’t. The filmmakers ran with an idea, but they didn’t have enough content to sustain the premise in any cohesive or meaningful way. It is not as if they don’t have the acting talent at their disposal. Rose Byrne (Bridesmaids) and Tiffany Haddish (Girls Trip) have comedic pedigree, but they can only work with the material they are given. I thought Salma Hayek looked out of place as the cosmetic giant’s head.

The script is thin (it is Sam Pitman and Adam Cole-Kelly’s first screenplay and it shows) and the direction by Miguel Arteta (Beatriz at Dinner) is lacking. I understand this sets out to be a chick flick and the audience I saw it with was made up largely of women, but the laughs in the cinema were decided muted for a reason.

So, a few zingers aside, Like a Boss doesn’t pass muster.

A film about make-up has a lot of making up to do. Problem is it is too late – the blemishes are too ingrained. Rated M.