Who would have thought that infrastructure could be made into a compelling movie? The Hummingbird Project deals with the idea that saving a millisecond can make hundreds of millions of dollars. 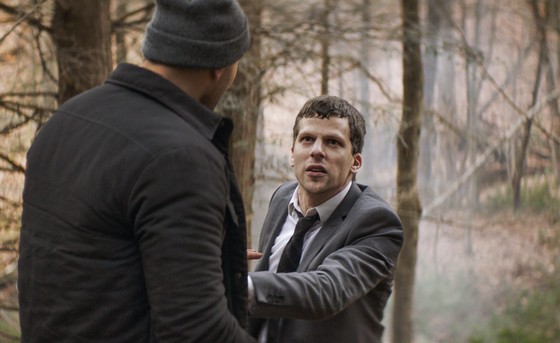 Cousins from New York, Vincent (Jesse Eisenberg) and Anton Zaleski (Alexander Skarsgård) are players in the high-stakes game of High Frequency Trading, where winning is measured in milliseconds. Their dream is to build a fibre-optic cable in a straight line between Kansas and New Jersey. It’s set to make them multimillionaires. However, nothing is as straightforward as it seems.

Anton is the brains. Vincent is the hustler. Together they push each other and everyone around them to breaking point to try to achieve their goal. Breathing down their necks is their old boss, Eva Torres (Salma Hayek), a sociopathic trader who will stop at nothing to see them fail. But no matter what the cost, Vincent and Anton are determined to cut through America to find their fortune.

Apart from the rather bizarre storyline, the characters make this picture … and there is no shortage of them. Jesse Eisenberg plays Vincent Zaleski a bundle of pent up energy; and the role suits him to a tee. Alexander Skarsgård is his counterpoint, Anton. The character seems to be on the autism spectrum and for the most part just wants to be left alone to crunch numbers.

I bought into the movie, if not the questionable project Vincent and Anton embark on. It’s a different offering that plays with the concept of outsmarting and outplaying one another. Put morality to one side because this isn’t about altruism, just about the stuff that makes the world go around – money.