Unlike a lot of filmmakers, Steven Soderbergh seems quite content being part of the streaming revolution. Alongside The Laundromat, the director booked another film for Netflix. High Flying Bird is rather more subdued than The Laundromat, but it shares some of that film’s DNA. Both are concerned with corporate power; and although the earlier release touched on the politics of race and money, they’re central to High Flying Bird.

High Flying Bird is a Rubik’s cube of a film. Soderbergh crafts a apparently unconnected scenes that don’t really coalesce until late in the film. Even within a scene, some references remain obscure until a later event illuminates them. It’s almost like an Impressionist painting – looking at the individual bits isn’t very helpful, but when you stand back and look at the whole thing, it makes sense. 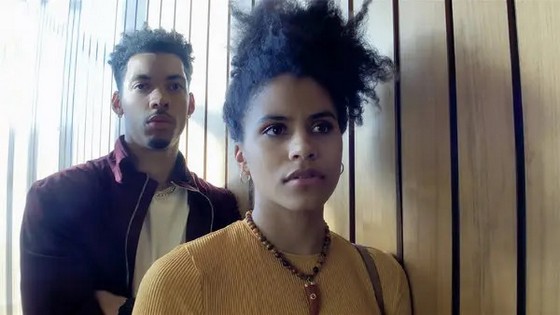 Ray Burke (Andre Holland) is a top sports agent in New York City. Ray thought he pulled off a coup by signing Erick Scott (Melvin Gregg), the no.1 draft pick in the NBA. Erick has signed on for “New York” (presumably the New York Knicks). But before Erick has even stepped on the court in a pro game, a lockout by team owners led by the oleaginous David Seton (Kyle MacLachlan) has put the season on ice.

Erick is caught in the middle – although he’s signed a contract, he won’t be paid until play actually starts. That in turn affects Ray and his agency. With revenue drying up, agency boss David Starr (Zachary Quinto) fires Ray’s assistant Sam (Zazie Beetz). Sam however isn’t about to leave Ray in the lurch. Over the next few days, they work on the only thing they’ve got left – a charity appearance for Erick at a local basketball academy run by the blunt Spence (Bill Duke) – who happens to be a mentor to Ray.

I found High Flying Bird heavy going in the early part. It’s dialogue-heavy, and it took a while for me to adjust to the language (tip: turn on closed captions – it really helps). But once it got going, it became a kind of fascinating mystery as Ray talks to several seemingly-unconnected characters. They include the chief negotiator for the players’ association Myra (Sonja Sohn) and Emera Umber (Jeryl Prescott), the mother of one of Erick’s on-court rivals. It becomes a bit like weaving, as all these threads need following, before they all come together at the end.

In the end, this film goes to some unexpected and interesting places. Soderbergh explores racism in sport, particularly how the capitalism that dominates the US sporting scene treats black athletes. The lines he’s drawing are clear by the end, even if they take a while to emerge. But of course all this – like so many things in life – is based in a power dynamic. Where that power is entrenched and moneyed, those in the system face daunting hurdles. Oh, and whether you’re into sports or not, just note there’s little actual basketball played in the film.

Soderbergh employs a unique visual style here. Similar to The Favourite, he uses fish-eye lenses, odd angles and unconventional framing to shake things up. While I’m not sure it was necessarily due to these techniques, I nonetheless felt drawn into the movie. Either way, it’s brilliant to look at.

Andre Holland (A Wrinkle in Time) gives a fine portrayal of a man under pressure as Ray. You can almost see the stress in his face and voice, even as he’s schmoozing. Sonja Sohn (Luke Cage) channels a similar kind of stress as Myra. Kyle MacLachlan (The House with a Clock in its Walls) provides a counterpoint as the seemingly unflappable Seton. Melvin Gregg (UnREAL) brings a bewildered quality to Erick. His character is in the middle of the drama, but has very little clue about what’s going on. I loved Bill Duke’s (Black Lightning) paper-dry turn as Spence. But the fabulous Zazie Beetz (Deadpool 2) steals the movie as the razor-sharp Sam.

Although it’s relatively short at 90 minutes, High Flying Bird is a dense, demanding experience. It’s not a “popcorn movie” even in these locked-down times. But if you want to be challenged to exercise your brain, this could be for you.