Do you like your period dramas to be fussy affairs filled with ruffles, secret courtships and proper manners? If you said yes, then The Favourite probably isn’t for you. Compared to traditional costume dramas, this is the cinematic equivalent of a Molotov cocktail.

Idiosyncratic Greek director Yorgos Lanthimos steps tentatively into the mainstream with this film. Beloved by indie audiences for quirky films like The Lobster and The Killing of a Sacred Deer, Lanthimos produces his most accessible work to date. Mind you, it has enough Lanthimos touches to keep it decidedly left-of-centre. It also has a strong Australian connection, with Tony McNamara co-writing the screenplay. 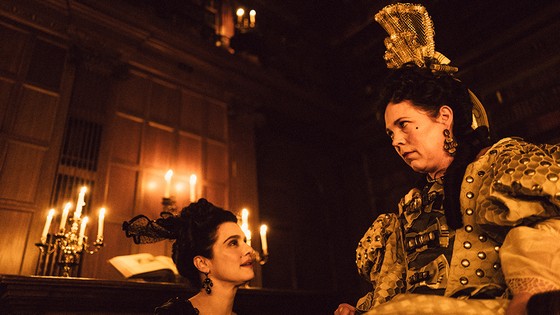 A few ground rules first. The film makes no claim to historical accuracy; although set in the court of the real Queen Anne and featuring real-life characters from that time in British history. It also imagines characters behaving in ways for which there is no hard historical evidence. So – not a history lesson. Also, while it features political manouevering, it’s not about the politics. It’s actually about power; those who have it and those who want it (a recurring theme in Lanthimos’s films). In particular, it explores what happens when those with power no longer have the capacity to use it; and how human emotions intersect with power.

It’s the early 18th Century. Queen Anne (Olivia Coleman) is an aging and infirm monarch. Squabbling among politicians about a war with France is vexing her almost as much as her frequent attacks of “gout”. She turns to her trusted confidante Lady Sarah Churchill (Rachel Weisz) for advice. Lady Sarah, whose husband is military commander Lord Marlborough (Mark Gatiss), sides with the Whigs, who are in favour of the war. But the arrival of Lady Sarah’s cousin Abigail (Emma Stone) at court upsets this cosy arrangement. Although initially placed in the kitchen, Abigail quickly ascends to the court proper after a simple act of kindness endears her to the Queen. Soon, Abigail and Lady Sarah are locked in a heated battle for the Queen’s affections; and each is prepared to use any psychological or emotional weapon they have to achieve their goal.

The script (by McNamara and Deborah Davis) throws out a figurative confetti of delicious – sometimes cruel – one-liners. It also serves up several magnificently weird scenes; some of which mirror actual practices from the 18th Century. One memorable sequence sees a group of foppishly dressed gents hurling pomegranates at a naked man, who seems to be enjoying himself. It’s also worth keeping in mind that sex was not just a weapon but the currency of royalty at the time. So, yes, there are sex scenes. And cruelty appears in many forms, so be prepared for that.

This is Lanthimos, so expect shocks. The tale takes several twists; some foreshadowed, but many appearing out of the blue. It also revels in the absurdity of its situations. Many of these centre around the realities of life in the 18th Century – disease, war and hardship. Hidden meanings abound in the dialogue. What the characters say often isn’t what they mean, so a degree of cynicism is required to translate. And to add to its mystique, Lanthimos ends the film with an enigmatic (even perplexing) sequence.

The Favourite represents the perfect synthesis of three key elements – the clever script, Lanthimos’s unerring direction and three powerhouse performances. Olivia Coleman (Murder on the Orient Express), Rachel Weisz (Disobedience) and Emma Stone (Battle of the Sexes) are all fantastic as the three women at the centre of the drama. Coleman gets the juiciest role as the quickly deteriorating Queen Anne, but the movie probably wouldn’t work as well as it does without any one of them. The men of the piece are largely peripheral, but Nicholas Hoult (Mad Max: Fury Road) at least gets one of the film’s best lines as the Tory leader Harley.

Robbie Ryan’s (American Honey) spectacular cinematography complements Lanthimos’s vision. From sprawling scenes shot with fish-eye lenses to intimate close-ups, he brings the “wow” to the screen. A soundtrack appropriately filled with Baroque composers like Vivaldi, Bach and Handel drives the action (though why an Elton John track was oddly included at the end is anyone’s guess).

For a season typically filled with heavy “Oscar-bait” movies, the crazy, witty world of The Favourite is a welcome change of pace. As mentioned, this is not for fans of stuffy period dramas. But if you’re willing to dive into something bizarre, I thoroughly recommend this film.