In 1973, former Wimbledon champion Bobby Riggs played women’s champion Billie Jean King in a spectacular tennis match – dubbed the Battle of the Sexes – at the Houston Astrodome. Riggs was also a serial tennis hustler, gambling addict and sexist braggart. It proved a landmark that ultimately had repercussions for the status of women’s tennis and the burgeoning feminist movement.

Riggs (Steve Carell) was a former #1 ranked player and three-time Wimbledon champion. Out of the top level for some time, he eked out a living on the seniors’ circuit – and participated in bizarre challenges for money. Riggs’ wealthy wife Priscilla (Elisabeth Shue) supported his gambling addiction – at least for a while. 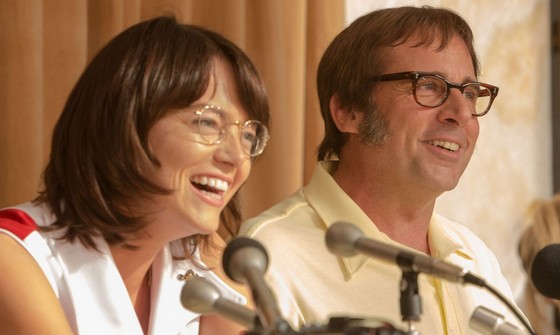 Billie Jean King (Emma Stone) was advocating equal pay for female players and for them to be treated seriously as professional athletes. She had been butting heads with Jack Kramer (Bill Pullman), the powerful head of the ATP, over the issue of equal pay for female players. Female athletes, especially tennis players, were not taken seriously at this time, and were not considered exciting to watch. Women were only supposed to be seen in the kitchen or the bedroom. When Kramer refused to give in to her demands, she started her own rival WTA tour.

Desperate for attention, Riggs challenged any “hairy-legged feminist” to a match to “prove” male dominance in the sport. He beat world #1 Margaret Court in straight sets. Buoyed by that success, he upped the ante. He offered $100,000 to any female tennis player who could beat him. Riggs bragged to the media that he was putting the “show back into chauvinism.”

The 29-year old King eventually agreed to take on the 55-year old Riggs at his own game. She played for pride and to bring dignity to womens’ tennis. The result changed the nature of professional tennis and the status of female players forever.

At that time though, King was also undergoing some personal problems and coming to terms with her own sexuality. Although married to Larry (Austin Stowell), her loving and supportive husband and tennis promoter, Billie Jean developed strong feelings for Marilyn Bartlett (Andrea Riseborough), a beautiful young hairdresser. Given the times though, King was unable to openly share her emotional connection to Marilyn because it may have destroyed her professional career.

This dramatization of that famous match explores the subversive politics of the period. It also touches on topical issues such as gender politics in sport, equality, sexual orientation, and respect – themes that are still relevant and important today. It’s such a great story that it’s surprising that it hasn’t been tackled on screen before now.

Simon Beaufoy, known for his collaborations with Danny Boyle on films like Slumdog Millionaire wrote the screenplay for Battle of the Sexes. And while the tennis match between King and Riggs is fittingly the centrepiece and climactic moment of the film, Beaufoy has also concentrated on King’s personal journey. However, the romance between King and Bartlett does slow the film down unnecessarily, and the pacing is a little uneven.

This enjoyable, crowd-pleasing film is the third feature from husband and wife directorial team of Jonathan Dayton and Valerie Faris (Little Miss Sunshine). They do a good job of putting the game-changing match into its historical perspective. Their handling of the climactic tennis match is superbly choreographed and staged. Oscar winning cinematographer Linus Sandgren (La La Land) also does a superb job of capturing the tone of the era with his washed-out colour palette. That look references the classic cinema of the 70s, giving the material a strong sense of nostalgia. Period detail, costumes, hairstyles and locations also reek of authenticity.

The casting of the two leads is spot on, with both Carell and Stone bearing a strong resemblance to their counterparts. Carell is perfectly cast here. He brings a wonderful sense of bravado and humour to his portrayal of the larger-than-life Riggs, playing him as something of an egotistical clown still living on past glories. But he is a colourful and nuanced character, and Carell makes him likeable enough despite his casual air of misogyny.

Wearing King’s trademark glasses and hairstyle, Stone is almost unrecognisable here. She is strong as the quietly determined, optimistic King who is trying to change the world. But she somehow comes across as a less interesting character than Riggs. Although outwardly confident, Stone brings a hint of vulnerability to her performance in those scenes that explore her tentative sexual awakening.