Do you like your movies light and fluffy? Maybe with a little romance thrown in? Yes? Then stop reading now, because The Killing of a Sacred Deer is not for you.

Director Yorgos Lanthimos is best known for his magnificently bizarre The Lobster (2015). Now he brings his particular (and peculiar) vision to one of the better known Greek tragedies. The Killing of a Sacred Deer is a modern adaptation of the Iphigenia myth – specifically as related in Euripides’ play Iphigenia in Aulis. 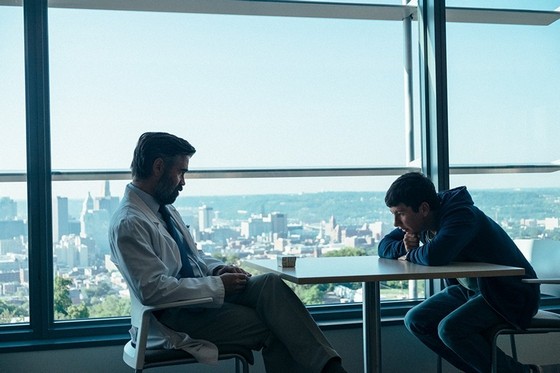 This is dark, dangerous filmmaking. Lanthimos infuses a feeling of impending dread basically from the opening scene. His trademark quirkiness and black comedy barely divert the film from its inevitably tragic course. Even if you know the myth, this film will keep you guessing till the very end.

Dr Steven Murphy (Colin Farrell) is a successful surgeon at a US hospital. On the surface, he has a happy conventional family with wife Anna (Nicole Kidman) and kids Kim (Raffey Cassidy) and Bob (Sunny Suljic). But Steven has taken a troubled teenager, Martin (Barry Keoghan) under his wing. What starts out innocently enough soon leads to Martin inveigling himself into Steven’s life. Bob’s demands become more strident, and involve not just Steven but his family as well. But when Steven tries to cut Martin off, a mysterious condition begins to afflict first Bob, then Kim. Steven confronts Martin, but is shaken when Martin makes a chilling threat.

The title refers to the triggering event in Iphigenia in Aulis, when Greek king Agamemnon accidentally kills a deer sacred to the goddess Artemis. This brings the goddess’s wrath down on him and his army, and she forces him into an unthinkable choice. The film doesn’t reveal its triggering event until late in the first act. But what follows for Steven is just as unthinkable.

This is not an easy film. Explanations are sparse, if they’re given at all. You simply have to accept (as in The Lobster) that the film exists in a world that looks like ours, but where things are somewhat different. Even if you’re familiar with the Iphigenia story, penetrating the film’s layers is tough. If you’re not familiar, it may be close to incomprehensible.

The film of course functions entirely as allegory. Lanthimos almost goads his characters, just to see how far they’ll go. A similar theme ran through The Lobster. But by the end, you may find yourself drained as the monstrous events mount up. In other hands, this might be a horror movie. But Lanthimos elevates it far beyond mere genre by infusing it with intelligence and depth of meaning. The result is a demanding but rewarding film.

Lanthimos again insists his actors deliver their lines deadpan. Without verbal cues, the cast have to do a lot with their faces and bodies. Colin Farrell is of course used to it, having starred in The Lobster. He again delivers a compelling performance as Steven. Nicole Kidman has become one of the most interesting actors around recently; eschewing the kind of “movie star” roles that marked her earlier career. Some of her choices recently have been intriguing and this is no exception. She’s rivetting as Anna. The same can be said of Raffey Cassidy (Tomorrowland), who brings a wistful quality to the innocent Kim. Young Sunny Suljic is also fine as Bob. Barry Keoghan (Dunkirk) is excellent – and disturbing – in the pivotal role of Martin. Look out for a re-booted Alicia Silverstone in a crucial cameo as Martin’s mother.

Although The Killing of a Sacred Deer probably won’t even make a ripple at the box office, it’s one of the most intriguing films of the year. It’s disturbing and perplexing. Its impact is almost visceral. Like I say, if you like fluffy comedies, this isn’t for you. If you want to be seriously challenged, see it.