Using harsh reality and pop culture as its backbone, Vox Lux is a hard-hitting drama about the price of fame. 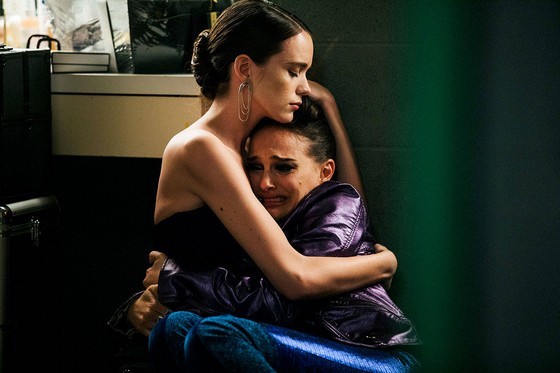 The film takes place between 1999 and 2017. After tragedy strikes at a US high school, Celeste (Raffey Cassidy) sings at a subsequent memorial service, which touches the hearts of mourners and Americans in general. The song becomes an anthem and Celeste emerges as a teenage music prodigy. She’s guided on her journey by her sister (Stacy Martin) and talent manager (Jude Law). Her meteoric rise is emblematic of the way these things work, but just as confronting is how the fame goes to her head as she reaches global superstardom.

Eighteen years later, following scandal and personal struggles, Celeste (Natalie Portman) finds herself on the comeback trail … but her demons are continually on the warpath. In her wake are her badly-treated sister, daughter (also played by Raffey Cassidy) and her manager.

Featuring original songs by Sia, writer and director Brady Corbet focuses on key events and cultural patterns that have defined the start of this century. That gaze is in keeping with his previous work, The Childhood of the Leader, which focused on the early part of the 20th century.

Vox Lux starts in shocking fashion. From there, it’s compelling to a point, but descends into a convoluted blancmange. About half way through, it overindulges in a clip of a punk rock band and recasts the central figure as her own daughter. It takes a while to work out just what’s going on. The star is reset as an egotistical villain indulging in the excesses often associated with music’s crash and burn lifestyle. I wasn’t convinced that was in the nature of the character more than half the movie had spent developing.

And Portman just played spaced-out, paranoid and troppo. The filmmakers overstretched again in the delivery of the final concert scenes, which went on for too long. The high-brow narration by Willem Dafoe was irritating in its complexity. It felt and sounded pretentious. I’m not critical of Defoe’s delivery – which I admired – rather of the content.

So, while Vox Lux certainly showed a great deal of early promise, it was let down by a less than spectacular back end.