There’s a poignant and melancholy quality to the sweet-natured Lucky. It serves as the swansong for revered actor Harry Dean Stanton, who passed away in September this year at the age of 91. Stanton delivers one of his finest performances in this low key independent drama. The film is an existential meditation on mortality and death and the things we leave behind. Johnny Cash’s song “I See Darkness” further reinforces this theme of death. 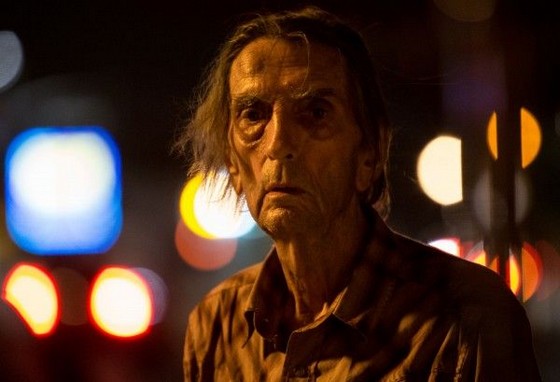 This likeable shaggy dog story follows the eponymous Lucky (played by Stanton) on a spiritual journey. He lives in a small one-bedroom house on the edge of town. We follow him through his daily routine – a bit of yoga, his TV game shows, his walks through the sleepy little desert town he calls home, and his nights in the local bar where he chats with some of the town’s eccentric locals.

The role of Lucky was written especially for Stanton by first time writers Logan Sparks and Drago Sumonja. A droll performance from the veteran actor, who is on screen the whole time, carries this allusive tale through its brisk 90 minutes. His weary and haggard look and taciturn nature capture the personality of this loner.

The supporting characters are also well-drawn. The cast includes Beth Grant as Elaine, the brassy waitress who works in the local bar that Lucky frequents; Tom Skerritt (who appeared with Stanton in Alien) as a WWII veteran; James Darren (from the Gidget movies of the 60s) as a barroom philosopher; and Ed Begley jr as Lucky’s doctor.

Lucky is the directorial debut for actor John Carroll Lynch, and he maintains an unhurried pace throughout. He draws good performances from his cast. This includes film director David Lynch as Howard, who worries about his tortoise which has escaped from his backyard. Lucky also seems to revisit the territory of Stanton’s 1984 film road movie Paris, Texas, directed by Wim Wenders. The arid locations – evocatively captured by cinematographer Tim Suhrstedt (Little Miss Sunshine) – and Stanton’s performance will strongly resonate with audiences who remember that film.