An intense and visceral experience, Dunkirk is war up-close and personal like few films before it. Christopher Nolan (Interstellar) writes, directs and co-produces the action-packed drama.

The picture opens as hundreds of thousands of British and Allied troops are surrounded by German forces. Trapped on the beach at Dunkirk in northern France with their backs to the sea, they face an impossible situation as the enemy closes in. RAF Spitfires engage the Germans in the skies above the Channel, trying to protect the defenseless men below. 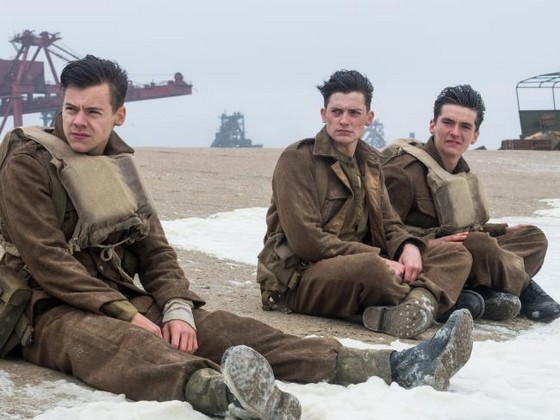 Meanwhile, hundreds of small boats manned by both military and civilians are mounting a desperate rescue effort, risking their lives in a race against time to save even a fraction of their army.

While fictional, Dunkirk is based on the real evacuation early in the Second World War. It was late May 1940 when the British Expeditionary Force, along with French, Belgian and Canadian troops, were encircled at Dunkirk. Though Britain was only 26 miles away, there was no easy way to reach it. The shallow beach, with its 21-foot tide, meant large naval ships couldn’t be used in the rescue.

What separates Dunkirk from other war movies is its unforgiving force. We are in the trenches throughout – figuratively speaking. We’re on the ground (the beach), on the sea (in the vessels) and in the air (in the cockpit with one of the fighter pilots). The thumping score by Hans Zimmer serves to heighten the tension.

The performances are typically gritty. Kenneth Branagh plays the British naval commander, while Mark Rylance plays the captain of one of the little ships that comes to the rescue. Newcomer Fionn Whitehead is compelling as a young British soldier on the beach. His character barely escapes enemy fire before finding himself stranded with the other soldiers awaiting their fate on the Dunkirk beach.

Harry Styles, from the boy band One Direction, makes his feature film debut as another young soldier and makes a good fist of it. Tom Hardy is cast as a heroic RAF pilot, while Cillian Murphy is the shell-shocked survivor of a torpedoed ship.

Nolan brings several threads together to form a complete picture of what confronts the British – the seemingly hopeless position in which they find themselves. Nolan has approached this by capturing one week on land, one day at sea and one hour in the air; and interweaves these stories.

The frequent use of close-ups (the director of photography is Hoyte van Hoytema) gives Dunkirk a greater sense of urgency than most in this genre. It is an all-consuming film, which – if you pardon the pun – takes no prisoners. As such, it may be too much for some. The approach is “more is more”; and that requires a strong constitution to sit through.

For me Dunkirk takes its places alongside the likes of Saving Private Ryan as a study of fear, bravery and devastation. Rated M, it scores an 8½ out of 10.