If you can imagine James Bond, mixed with Harry Potter and topped with Edge of Tomorrow, you might have some idea what Christopher Nolan’s new epic Tenet is all about. In terms of scope and ambition, this is one of Nolan’s grandest films. But the big ideas get lost in an overly complicated script and some muddy sound design.

Nolan has always been fascinated by time as a cinematic element. Even his early work Memento (2000) ran “backwards”. He directed Inception (2012) – with which this film shares some features – a dazzling mind-bender of a film set in multiple “realities”. And more recently, his Dunkirk (2017) played out via several fragmented timelines. Tenet is arguably the apotheosis of those films; a broad canvas for Nolan to stretch his imagination via different timelines happening not just in the same movie, but often simultaneously on screen. 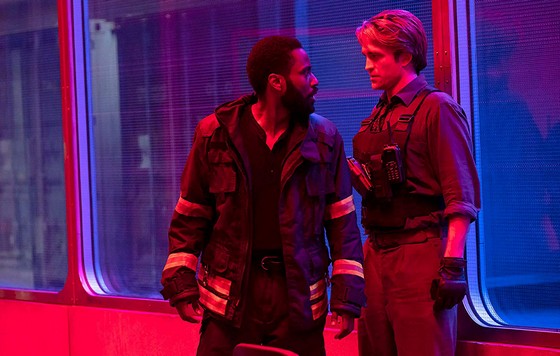 The complex plot bewildered me a bit, so forgive me if I don’t pick up all the threads. The film’s central character – known only as The Protagonist (John David Washington) – is a CIA operative. When an operation in Ukraine goes south, he bites into what he thinks is a suicide pill. But he wakes a few days later on a ship where the mysterious Victor (Martin Donovan) gravely informs him of an impending disaster. The key is a network of individuals identifiable only by a hand gesture and the word “tenet”. Things become a little clearer when The Protagonist meets scientist Laura (Clémence Poésy), who demonstrates that time doesn’t necessarily run in only one direction.

Basically, it seems some bad guys in the future are sending advanced tech back in time to create a very dangerous – possibly apocalyptic – situation. The Protagonist finds an ally in Neil (Robert Pattinson), who’s possibly MI6, but who seems to know an awful lot about quantum physics. After some guidance from one of the “tenet” disciples, Priya (Dimple Kapadia), The Protagonist and Neil find their way to vicious Russian arms dealer Andrei Sator (Kenneth Branagh) and his estranged wife Kat (Elizabeth Debicki).

Tenet is high-concept filmmaking on a grand scale. But Nolan seems to lose the forest for the trees. As the sole credited screenwriter, his script gets bogged down in the minutiae of his concept. By the time of the climactic battle, characters are saying things that might make sense to Nolan, but which went completely over my head – and many others in the preview audience. If I had to guess, I think the first half of the film runs “forward” in time, the second half “backwards”; and the final sequences, both at once. I’m sure an advanced physics degree would help, but scientists probably aren’t the audience for this film. But Nolan further frustrates with a fuzzy sound design that muffles or obscures much of the dialogue that might help explain what’s happening. Early on, a character advises The Protagonist, “Don’t try to understand it.” Maybe that message was meant more for the audience.

You could make a case that Tenet is essentially the big-budget version of Shane Carruth’s award-winning indie Primer (2004). But where Primer was elegantly enigmatic, even for all its rough edges, Tenet is baffling though beautiful.

That said, Tenet nonetheless delivers in other areas. It neatly taps into a Bond vibe with lots of action, some wisecracking and exotic locations. At one point, The Protagonist is even exhorted to buy a better suit. The big set-pieces are spectacular – and you get to see most of them twice (from different angles). Regular Nolan collaborator Hoyte Van Hoytema (Ad Astra) provides some excellent cinematography, and Jennifer Lame (Marriage Story) does fine work in the editing suite. I could however have done with less of Ludwig Goransson’s (Creed II) insistent score.

John David Washington has clearly grown as an actor since appearing in Spike Lee’s BlacKkKlansman. He seems much more at ease here as The Protagonist, settling into the lead role with some aplomb. Even though the character is similar to her role in The Night Manager, Elizabeth Debicki (Widows) is still brilliant as Kat. Her chemistry with Washington felt a little flat however, which detracts somewhat from The Protagonist’s motivations. But Robert Pattinson (The Lighthouse) provides great support as the rather raffish Neil. Sadly, Clémence Poésy, Martin Donovan and Aaron Taylor-Johnson are rather wasted in small roles. Kenneth Branagh however chews the scenery mightily as the odious Sator.

Tenet is plainly the biggest thing in cinemas (where cinemas are open, of course) at the moment. And in these pandemic-hit times, if you can go to the cinema, this is more than worth the price of admission. Just don’t expect to understand it.