Heart of Darkness in space anyone? Director James Gray (The Lost City of Z) and star Brad Pitt go boldly where Kubrick, Coppola and Tarkovsky have been before in Ad Astra. This quietly powerful contemplation on fathers, sons and the final frontier won’t appeal to everyone, but it gets top marks for asking the big questions. 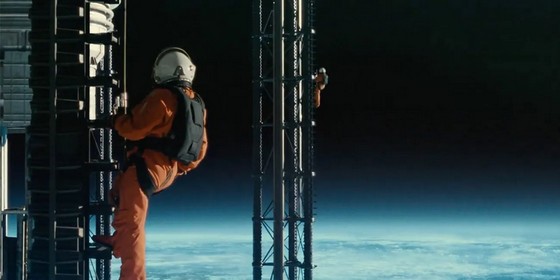 The film opens with a spectacular sequence in which an unseen force throws Roy McBride (Pitt) from a low-orbit space facility. After tumbling (safely) to Earth, Roy learns that the incident was caused by an anti-matter surge coming from Neptune. Just so happens anti-matter was the power source for the long lost Lima Project – a deep-space exploration voyage led by Roy’s father Clifford McBride (Tommy Lee Jones). The craft was last heard from near Neptune. Given the devastation caused by the surge around the world, the US Space Command wants a solution. They draft Roy in for a journey to humanity’s farthest outpost – on Mars – to send a message to Clifford in the hope he might still be alive and able to do something about the surge. Roy’s chaperone is the affable Colonel Pruitt (Donald Sutherland); but an incident in transit on the Moon sidelines him. So Roy has to proceed to Mars alone – but not before Pruitt divulges some critical information that changes Roy’s view of his mission.

You can see the DNA of other films in Ad Astra. The mood, pacing and visuals echo 2001: A Space Odyssey and Solaris (with a dash of La Jetee thrown in). The plot is basically Heart of Darkness (of course filmed as Apocalypse Now) with an overlay of strained father-son dynamics. Clifford is basically the Richard Dreyfuss character in Close Encounters of the Third Kind; while Roy is the kid he leaves behind. The film delves into what it does to a kid to have a father choose something else over him. It soon becomes clear that many of Roy’s choices – and mistakes – echo those of his absent father. But when it comes to finding Clifford and confronting those issues, the film tracks a familiar descent into madness.

Gray employs a deliberate pace. Much of the film is shot in disorienting close-up. And he employs a voice-over narration to fill out the blanks in the taciturn Roy. So it’s not really going to be a film for action junkies. But he also stages five brilliant set-pieces in between the long stretches of exposition. The first one alone – involving Roy being hurled thousands of metres to the ground – is worth the price of admission.

Since the film is principally concerned with reaching into Roy’s psyche, much of the acting burden falls on Pitt’s broad shoulders. Safe to say Roy is pretty much the polar opposite of Cliff Booth from Once Upon a Time… in Hollywood. Given his character’s stoic outlook, Pitt has to find a lot via facial expressions and gestures. I found his performance compelling. Tommy Lee Jones appears in several guises through the film, and does a good job conveying the heroic but selfish Clifford. Most of the others in the large cast get very limited screen time; but look out for Ruth Negga (Loving) in a pivotal role.

I wouldn’t exactly say I “enjoyed” Ad Astra; but it was a gripping ride into unfamiliar territory. I appreciated it intellectually more than “liking” it emotionally. But if intellectual space epics are your thing, this is definitely one worth catching.