Spike Lee has to be one of the most influential filmmakers of the past 30 years. From the incendiary Do the Right Thing (1989) to the slick Inside Man (2006), his movies have marked a generation. So when a new Spike Lee “joint” comes along, you better pay attention. The great news is that, after a patchy few years, Lee is back on top with BlacKkKlansman.

Like many of Lee’s films, BlacKkKlansman is more than it appears. The base story is a rollicking true-life tale about a black police officer who manages to infiltrate the Ku Klux Klan. Lee tells this tale in a spirited fashion, complete with period fashions and music. But his intention isn’t just to entertain. He’s here to make a point. 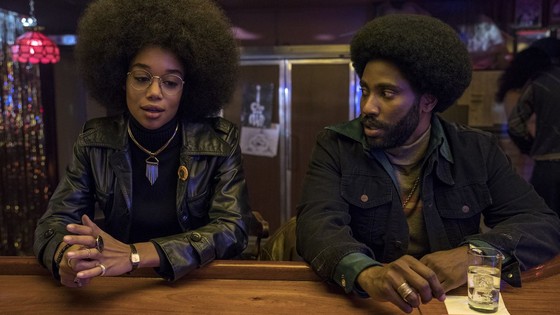 The film opens in 1979. A confident Ron Stallworth (John David Washington) fronts the Colorado Springs police department and announces he wants to join. Since the department has never has a black officer before, this is new territory for everyone. Chief Bridges (Robert John Burke) decides to take a risk on Stallworth. But the idealistic Ron quickly finds himself on clerical duties. He gets a break though when asked to go undercover and observe a speech by black activist Kwame Ture (Corey Hawkins). At the meeting, Stallworth encounters the fiercely intelligent Patrice Dumas (Laura Harrier), a student organiser whose chapter has sponsored Ture’s speech. After Stallworth diligently reports back, Bridges upgrades his duties.

An ad in a local paper catches Stallworth’s attention. On a whim, he decides to call the local chapter of the Ku Klux Klan. Using his “white voice”, he manages to get himself signed on – using his real name. There’s one problem though – he obviously can’t show up to a Klan meeting. Up steps Det. Flip Zimmerman (Adam Driver). He poses as Stallworth to meet up with the local Klansmen, led by Walter Beachway (Ryan Eggold). It soon becomes apparent to both Zimmerman and Stallworth that, although pretty disorganised, these small-town racists have some dangerous plans.

BlacKkKlansman is an unapologetically political film. In typical Lee fashion, he makes his point in diverse ways. Strident speeches, quirky asides, visual cues, an uncomfortable exploration of Birth of a Nation, slapstick comedy and references to Blaxploitation movies all feature. But at the very end of the film, Lee presents a stroke of genius. In a short coda, Lee draws the strands together and (deftly but forcefully) explains why all this matters in the present. This flips BlacKkKlansman from an interesting movie, into a powerful movie. In fact, this might just be the most important movie of 2018.

Lee of course has always been a political filmmaker, but BlacKkKlansman provides a new perspective. Remember the (often-misunderstood) scene in Do the Right Thing, when Mookie throws a trash can through the window of Sal’s pizza joint? Well BlacKkKlansman is, in effect, Lee saying “put down the trash can”. A more mature Lee is telling this generation to be smarter; to use brains and wit to win. Don’t lose the passion – but you don’t have to throw that trash can.

John David Washington – yes, the son of Denzel – may not have quite the cachet of his famous father just yet, but he gives a great performance as Stallworth. Adam Driver (Star Wars: The Last Jedi) provides an effective foil as the agreeable Zimmerman. Laura Harrier is almost unrecognisable from Spider-Man: Homecoming but is excellent as Patrice; while one-time teen heartthrob Topher Grace (American Ultra) makes a memorable appearance as the odious KKK chief David Duke.

You need to see BlacKkKlansman. Even if you don’t like some of his other stuff, this film offers so much. This is one of Spike Lee’s finest films. I mentioned this could be the most important movie of 2018. But it’s also one of the best.