For those of you still missing the soaring strings of a certain English drama, try Belgravia.  Set in the early Victoria era, a time in which the aristocracy was losing its treasured sons to the Napoleanic wars, Belgravia is a lavish and grandiose production in which evidently no expense has been spared. 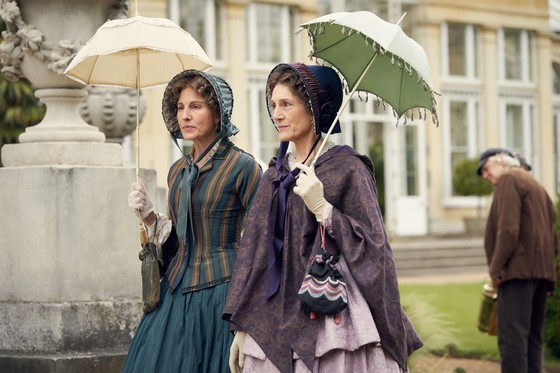 Beginning with the Duchess of Richmond’s ball in Brussels, 1815 (an actual historical event prior to the Battle of Waterloo), all those with an investment in the European war effort are in attendance. It is an uncertain social victory for Anne Trenchard (Tamsin Greig), the pragmatic and sharply intelligent wife of James Trenchard (Philip Glenister), whose construction company has enjoyed recent success as England’s forces struggle to repel the march of the French.  An invitation to the ball was not one that would normally be offered to the newly monied Trenchards, however eventuates through the affection in which a certain dashing son of a Earl holds for their treasured daughter, the vivacious Sophia.

Many of Belgravia’s society live in Trenchard homes, and though the upper classes accept the need for useful resources such as Trenchard, the blustering businessman or his wife will never be fully accepted as one of their own.  Flash forward twenty-five years after the Battle of Waterloo, which took place two days after the Duchess of Richmond ball.  Mrs Trenchard once again makes the acquaintance of the Duchess Brockenhurst (Harriet Walter), whose son brought ruin upon their daughter.  A stray comment by Lady Brockenhurst gives Mrs Trenchard cause to question her fealty to a long held secret.

Written by Julian Fellowes, Belgravia at first seems to be a bit more of the same. The question is, were other earlier dramas better productions? The answer is yes. Period predecessors that set the bar for English historical manor house dramas such as Downton Abbey and Upstairs Downstairs had the sold gold benefit of being first.  It is from not being first from which Belgravia suffers.  It is familiar territory, only just not as interesting or as fresh to our experienced eyes.  Fellowes had the golden goose in his hands when he wrote Downton Abbey, and Belgravia is like the more uncouth cousin in the corner of the grand ballroom.  Not as swoonworthy perhaps, but still worth keeping your eye upon.

Belgravia presents the expected dramatic provocations of the class divides present in the era; advantageous marriages, illicit liaisons, business alliances, conniving house servants, the menace and  skulduggery of money lenders and men’s gaming salons. It is however the matriarchs upon which the action is focused, as the two circle each other with a level of considered skill that would have made both excellent politicians, had that been allowed to their gender.

So whilst the opening episodes of Belgravia may indicate this is a period war drama, Belgravia is still frothy enough to make soap.  It is indeed political, but the politics are more the one million and one social manoeuvres devised and practiced by the upper classes who simply must hold onto their wealth and privilege at any cost.

Fellowes has stated that Belgravia was intended as a one season drama, though never say never. Belgravia is a six episode series now streaming on FOXTEL on Demand and Binge.