August 1985. England wakes to the news of the White House Farm slayings. Five members of the same family killed in the one incident should have warranted more than a cursory look over and a quick summation of murder-suicide by Essex local police.  White House Farm is a BBC First series, dramatizing the events of a crime that shocked the nation. 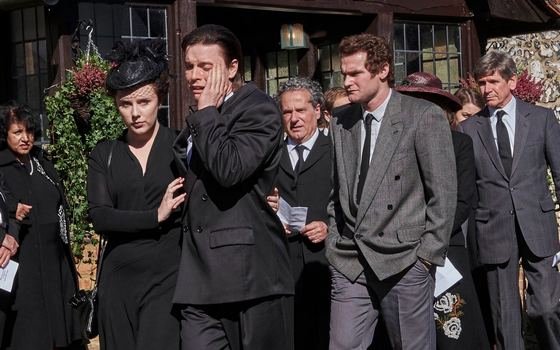 At the beginning of White House Farm each room is shown, empty of its former occupants which once gave the cluttered farmhouse life. Sheila aka ‘Bambi’ (Cressida Bonas) was the mother of two twin boys, a former model and the adopted daughter of local couple Nevill and June Bamber. As Sheila was known for being rather fragile with mental health issues, it is easy enough for the locals to believe that the young mother snapped one night when home from London.  Perhaps Sheila became a killer because of the continued disapproval of her devoutly religious parents, or because Sheila no longer had the constant support of her former husband, the sweet natured Colin (Mark Stanley) and felt completely overwhelmed.

As is evident very soon to the newly transferred Detective Sergeant Stan Jones (Mark Addy), the theory of a murder-suicide doesn’t hold up.  There was the odd timing of a late night phone call to Jeremy Bamber (Freddie Jones) from his father Nevill Bamber, and also its difficult to believe that a slightly built woman such as Sheila could have murdered four people without at least one of them running for help.  DS Jones has a hard fight on his hands to convince his pig-headed superiors to let him investigate further before the bodies are cremated and the possibility of all future forensic discovery is forever lost.

The key relationship dramatized in White House Farm is masterfully nuanced.  The funerals and the frenzied attention of the media exerts a toll on everyone and the assertion that Jeremy Bamber has the support of family and friends fails to convince.  Jeremy and his seemingly vacuous girlfriend Julie (Alexa Davies) appear to have a very co-dependant partnership, but there is more to it. The character of Julie is a curious one, reactive as it is to the chameleon nature of her handsome boyfriend as he struggles to remain in control.

The standout performance of White House Farm is that of British actor Freddie Jones as the effortlessly charming Jeremy Bamber (who was 25 years old at the time of the killings). The rest of the cast are no slouches either, and you might find yourself desperately trying to place where you have seen some of the supporting cast before.  Gemma Whelan (who played Yara Greyjoy magnificently in Game of Thrones) is the pragmatic Ann Eaton, niece to the Bambers.  Ann cannot believe how far off the mark the investigation is, and doggedly pushes back on the reluctant police in every way she can.

Some of the characters we are clearly supposed to heap our suspicions upon immediately and the scripting around them could hardly be any more obviously designed to illicit those reactions.  It may be that life is never as fascinating as fiction, and a closing scene between the detective and Julie as she sells her story to the press is a curiously flat way to end the series.

White House Farm is absorbing television and recommended to anyone who likes to watch true crime documentaries as well as to those who love their British police procedurals. The real life stills of the defiant face of Jeremy Bamber are chilling to google, and the re-enactments of these exact moments in time can be identified as you watch White House Farm.  If you were around in the 1980’s or otherwise vaguely recall hearing about the White House farm killings, watching this series may give you a certain amount of satisfaction as to how the case was eventually closed.