It is extremely satisfying to see an actor that you’ve observed bouncing around various TV shows over the years finally landing, and nailing, the peak role of his career. Billy Campbell is not a name you’ll twig to straight away until you see his sternly handsome face on the screen and then its ‘oh, THAT guy!’.  Nominated for an International Emmy in 2018 for his portrayal of the softly spoken detective, the stalwart Campbell brings everything he has to Cardinal. 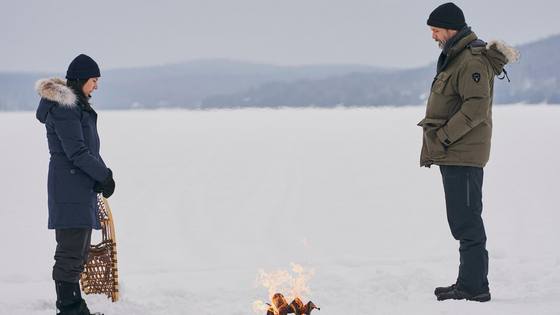 As the first victim is the husband of a local politician, there is added pressure placed on the investigating detectives for a quick solve.  The second victim, an elderly woman, meets her death in a junk yard full of old car wrecks. The connection, the detectives determine, is not between the victims themselves but in the people that that they have left behind.

Detectives John Cardinal (Billy Campbell) and Lise Delorme (Karine Vanasse) have reached a turning point in their careers and in their relationships.  Delorme has accepted a job offer in another city, partly due to the wish to not continually run into her ex with his new family, and mostly because her work has run its course in the Algonquin Bay police department. Cardinal’s adult daughter is still fussing over him long distance, concerned that her father is not managing with both his grief and tackling the task of selling the family home.  She’s right.

Based on the Canadian crime novels by Giles Blunt, Cardinal the series is everything you want to experience on the small screen.  The strengthening of the bond between Cardinal, the older Anglophile detective and Delorme, the young and ambitious Francophile detective has been the focal point of this stellar police procedural series.  Incrementally the two partners have become the perfect work pairing, their mutual respect for each other’s abilities and insights becoming more evident with each case.

The subplot of John Cardinal struggling to help his mentally ill wife through the previous seasons has always been so realistic and gut punching to watch that these scenes could have carried the whole show, possibly without the inclusion of its convoluted crime plots.  John Cardinal has always been a complex character, fiercely loyal to both the job and the people he loves, often fighting with his inability to make both of those concerns compatible.

Filmed in Ontario, Cardinal has a certain colour aesthetic that is carefully maintained throughout, despite what must be the difficulty of filming in such winter white conditions. All that white needs to be tempered with the clarity of the dark.  It’s a gorgeous visual, and you rarely see any garish colour in any scenes of Cardinal, the purity of its icy landscape a foil for some astonishingly cruel and violent acts.  Season four serves up uniquely horrifying images of victims frozen to death, as if someone had just hit pause on their lives mid-action.

Four seasons of Cardinal has meant quite a few tears (for us viewers) and a lot of emotional investment in its two unforgettable lead characters.  Watching Cardinal knowing it is the final season?  Bittersweet!  Not having all the threads tied off for Cardinal and Delorme?  Fitting and expected, but still painful.  Cardinal is one crime series that can be confidently recommended as some of the best ‘ice noir’ able to viewed on the small screen.

Cardinal is immensely bingeable and the perfect wintry crime drama to hunker down with.  The final season is a short one, just the six episodes. Haven’t seen the first three seasons?  Don’t worry, they are all there for you to be enjoyed now on SBS on Demand.  You are in for an absolute treat.