It is difficult to read of women’s lives being micromanaged by their domestic captors to the point of scheduled toilet breaks, and of young children being raised entirely behind closed doors.  These are hard novels to take on. If you are reading this because you have heard Dear Child compared to ‘The Room’, you will however find quite a different kind of novel here. 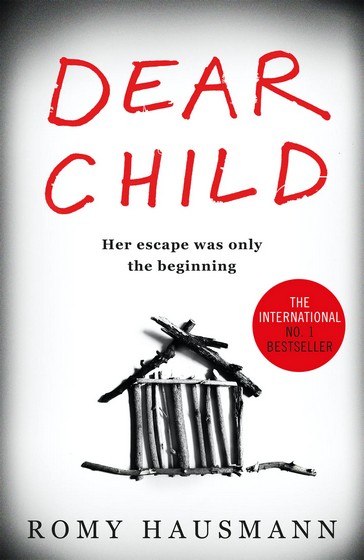 To her husband, she is Lena, and to the children, she is Mama.  Mama is a fragile lady who often has the shakes and can sometimes be a bit forgetful.  Sometimes Mama might forget to say thankyou, or neglect to put the children to bed on time.  Luckily for Mama she has fourteen year old Hannah to issue the odd reminder before Papa becomes wise to any transgressions.

Mama, Papa, Hannah and Jonathan all live together in a cabin in the woods.  Lockdown is every day, and it is only Papa who is allowed to go out into the wide world.

Lena’s parents Matthias and Karin never gave up on finding their darling daughter.  After fourteen years of waiting for that all important phone call, one night it finally comes. A young woman fitting the description of Lena has escaped her captor and has been hit by a car on a forest road.  Lena is safe for now, and they learn she did not come into hospital alone.  Everything changes yet again when Matthias and Karin first meet Hannah, the spitting image of their Lena.

Dear Child begins with two people being bundled into an ambulance. As much as it is a legacy novel about the aftereffects of such extreme deprivations of liberty, Dear Child skirts around an even more urgent concern as the novel progresses.  What if there were others?  Is the kidnapper replicating his favourite crimes over and over?

The voices of the novel are the woman from the cabin, teenage Hannah, and Lena’s father Matthias.  So we have the viewpoint of a child who was raised in captivity, a young woman who has known life in the outside world, and a parent who had learned to live with not knowing what had happened to his child after she went missing. Each has their own perceptions of what is right, who needs to be punished, who might be hiding something.

Much of the events of Dear Child are relayed via flashbacks.  In these there are a lot of puzzling inclusions which only make sense in the novel’s wrap up. Clues are cleverly dropped in, requiring a bit of backtracking to see what it was that tweaked your curiosity on the first run through.  Cleverly constructed with many ‘blink and you’ll miss it’ moments, Dear Child is an accomplished first work of many moving parts that pivots away from the identity and motivations of the kidnapper and places that focus instead on its victims.  What happens next when they are free?

Dear Child is the debut novel of German author Romy Hausmann and is published by Hachette Australia.