In the opening scene of Fatima, a scared 10-year-old girl has a vision that would shape the course of her life. That was in 1917, shortly after Portugal had become a Republic and turned anti-clerical. Next, the film cuts to a convent in the city of Coimbra in 1989. That girl, now an ageing nun (Sônia Braga), relays her story to a professor (Harvey Keitel) – a non-believer – who is writing a book. 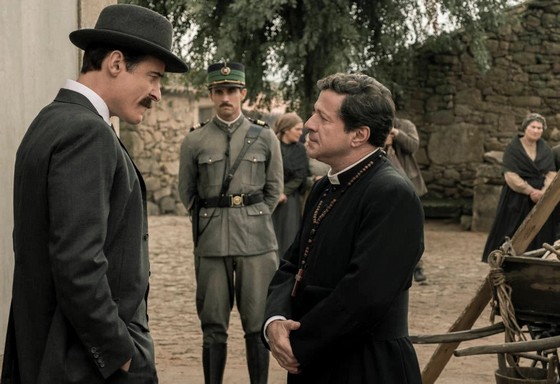 The first vision Lúcia (Stephanie Gil) sees in a cave on the outskirts of Fátima seven decades earlier, is an angel. The second, while still there, is of her brother, Manuel (João Arrais), being injured in combat. Later, there are frequent appearances by the Virgin Mary (Joana Ribeiro), who is seen not just by her, but by her two young cousins – Jacinta (Alejandra Howard) and Francisco (Jorge Lamelas).

Lúcia is a part of a small community of farmers, which includes her mother and father. Her visions are immediately denounced as lies and the work of the devil. Her mother, Maria (Lúcia Moniz), frequently admonishes her. Yet, try as she, the local priest, Father Ferreira (Joaquim de Almeida), and the powerful Mayor, Artur (Goran Višnjić) do to get Lúcia to recant and keep her mouth shut, she refuses to be silenced. The Virgin Mary has told her, her cousins and the community to constantly pray and repent for their sins, otherwise an even more cataclysmic war will confront them.

It would be easy to dismiss the thought of turning this story into a plausible feature film as fanciful. Indeed, at the start I was highly dubious. The very idea of credibly representing an angel and the Virgin Mary on screen could easily have turned the whole thing into a folly. Fortunately, not so. While not without flaws, Fatima weaves an engaging tale of a dutiful young girl who is desperate to do the right thing in the face of division and despair.

Stephanie Gil displays a deft touch as the lead, never succumbing to a syrupy representation, which would have totally undermined the film. I found some of the other, adult actors less convincing. The so-called miracles are not overblown.

Overall, the movie takes a significantly gentler approach to the subject matter. Still, some may still Fatima as poppycock. I, though, regard it as a fair attempt to capture faith on film.