Deadwater Fell doesn’t mess about, introducing us to a charming village full of adorable villagers right before polishing four of them off in a house fire.  We haven’t met any super villains yet so soon in the piece, so where does our suspicious eye cast its ire first?  To the only survivor of the fire of course. 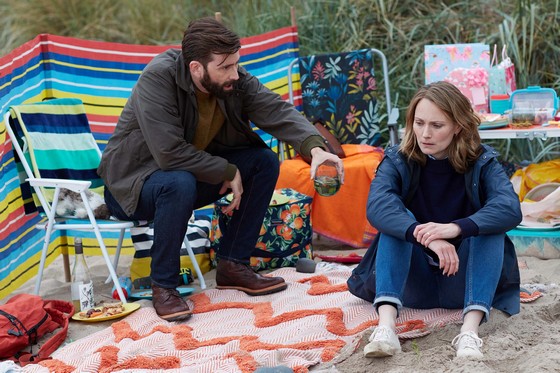 Tom Kendrick (David Tennant) is the GP of a quaint Scottish village and his lovely wife Kate (Anna Madeley) is a much loved teacher at the local primary school. Their friends Steve (Matthew McNulty) and his girlfriend Jess (Cush Jumbo) plus the two families’ assorted collection of kids all pop in and out of each other’s lives, great friends indeed and choosing to spend their leisure time together whenever they can.

The village of Kirkdarroch is both small and tightly meshed, with all coming together in times of hardship as all those living in healthy communities should.  After a pleasantly tiring day rounded off with a bonfire and shed dance, Tom and Kate make the short walk home with their kids, dropping off Steve and Jess along the way. Later that night, doing a step motherly bed check on Steve’s two sons, Jess sees flames billowing out from the Kendrick’s house up the road.  Launching into action, Steve and Jess bolt to the scene of the fire.  Steve, calling up on his policeman rescue training, climbs in through a window and begins by retrieving the lifeless Kate.

There’s never any fear of David Tennant being typecast as the chameleon like actor only needs a bit of dodgy hair dye in order to complete his transformative process.  We soon forget wherever it was we saw him on the screen last.  Ignore the comparisons to Broadchurch (especially the cringeworthy and unnecessary US version) and focus instead on how quickly we are able to be sold on the complex and nuanced characters that he plays. Putting the broad Scottish accent aside (which Tennant has proved in other works that he can skilfully ditch when required), Tennant plays Tom Kendrick on a knife’s edge of sympathy and suspicion, being likeable one moment and repugnant the next.

If you appreciate a crime drama that explores the before as well as the after in equal measure, Deadwater Fell meticulously depicts both.  All the dynamics of close friendships that can exist between neighbours and work mates, between school children and their peers all play a part in the crime which, as it turns out, is not the huge shock to all that it first appears to be.

Deadwater Fell has some interesting things to say about complicity in the aftermath of a crime.  The speed at which people can turn away from someone they previously supported, the pains at which a former supporter may go to distance themselves away from an accused when the evidence begins to stack up against them is not sledge hammered in Deadwater Fall, but it is included.

The characters in Deadwater Fall are slow on the uptake when times are good, but not so much when a mother and her three children have been killed. The statement here is that it seems it takes such a horrific incident for the bystanders to question what they themselves may have chosen not to see before.  The subtleties of gaslighting as part of the multi layered campaign of domestic terrorism that is coercive control are convincingly portrayed in a series that doesn’t overplay its hand. Instead Deadwater Fall lays all the pieces down, out of order,  so that viewers can come to their own conclusions, afterwards wondering where their own prejudices might lay.

Deadwater Fell is a four part British crime series currently streaming in its entirety on FOXTEL on Demand.