It is a credit to the writers and production team of 13 Reasons Why that this groundbreaking teenage Netflix drama made it all the way to a fourth season. The previous three seasons relied heavily on the repercussions of a teen suicide in season one, and it seems to have been an interminably long school year for the senior students of Liberty High to endure as they continue to process their collective grief and feelings of guilt. 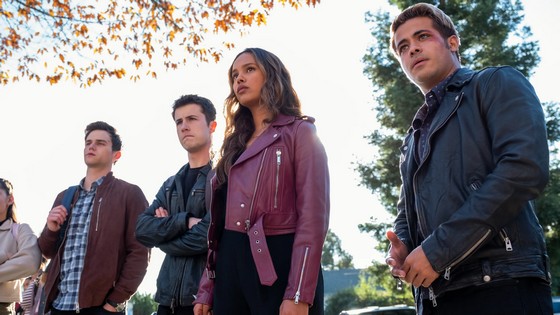 Essentially a one-trick pony (flashback scenes and tapes of the deceased Hannah Baker), 13 Reasons Why made a creditable second season but needed to introduce a couple of key new characters to drag them all over the coals of regret again for the third outing.  At the beginning of this fourth and final season, the troubled Liberty High seniors are all banding together in their complicity and half heartedly trying to imagine what they will do when they graduate.

Clay Jensen (Dylan Minnette) is starting to unravel as he experiences panic attacks and paranoia about the increased security presence and police attention at his high school.  The school community is rumbling along, likely eager to get rid of the most problematic senior year they’ve ever had, cajoling its overgrown students (some of which played by actors now leaving their twenties) to push through to the finish line.  College is looming and in the Jensen household, there are now two prospective new college students to cough up the family bucks for.

Someone has spraypainted the college with graffiti claiming that the Monty was framed (a student accused of sexual assault and murder in the last season), and Clay’s group of friends need to hunker down with what they know. Clay’s poisonous girlfriend Ani (Grace Saif) stays behind when her mother leaves town, wanting to finish her school year with her new friends at Liberty. She has a purpose – to keep everyone safe from the decisions she made to cover up the murder of rapist Bryce Walker (Justin Prentice), the most complex of the bad boy pack who have all indirectly or directly caused most of the grief in 13 Reasons Why.

13 Reasons Why has moved a long way on from the bittersweet and moving teenage drama we first encountered back in 2017. Hannah Baker’s insights into her classmates and why she needed to leave them behind are no longer an integral part of the drama.  Clay is still experiencing hallucinations, but none of them are the counsel of his lost crush Hannah Baker (Katherine Langford).  They are now however of two former male classmates, and tormentors, who met grisly ends.

Causing a fair amount of consternation each season opener for tackling topics such as rape, drug use and teenage suicide, 13 Reason Why has been a worthy addition to the young adult market.  The show never felt like it was created as an opportunity to sexualize children for the small screen (not hard to think of many others that manage to do so in almost every single episode).  13 Reasons Why did falter many times with unbelievable plot lines and cookie cutter casting/ miscasting, but with time most of these niggles ironed themselves out.  As a conversation starter, 13 Reasons Why has not failed each year to draw the parents of high schoolers to the screen also in order to understand some of the challenges their kids face in their torrid high school years.

13 Reasons Why S4 (final season) is streaming now in its entirety on Netflix. It has been an interesting ride, and for those of us that have stuck it out this long, it’s a sad event to see it leave the small screen. But it was well and truly time.

13 Reasons Why is based on the novel of the same name by American author Jay Asher.