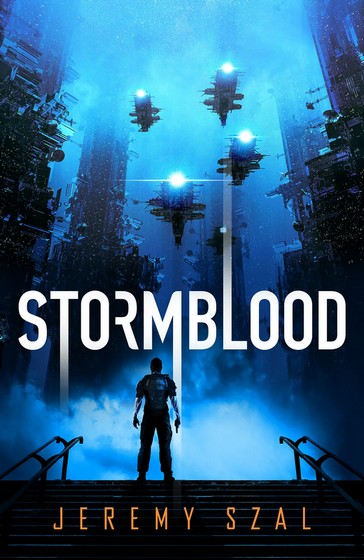 Vakov “Vak” Fukosawa is an ex-soldier for Harmony, the galactic hegemony following a destructive war with a force known as Harvest. He lives on a giant, hollowed-out asteroid that provides shelter and commerce for a range of galactic species. Vak was part of a special force called Reapers, deliberately infected with Stormtech, the essence of an alien race called the Shenoi. Stormtech gave Vak and his team supersoldier-like powers of perception and healing but also fuelled rage and violence. Years later, Vak is able to manage the Stormtech in his system but his fellow soldiers are dying and the illegal Stormtech trade is booming. Harmony bring him in to help them find the source of the drug, partly because they already know that his estranged brother Artyom, is involved.

Vak investigates, usually not following the rules laid down by his handler and getting himself into trouble as a result. As he gets deeper the dangers increase and the violence escalates and he uncovers secrets that both his allies and his enemies would rather stay undiscovered. The way he tends to gather this information is by getting himself captured and then tortured in some way while someone monologues or gives away important clues and then uses his stormtech-enhanced powers to escape.

Szal has a hard time getting Stormblood to emerge from under its literary, cinematic and video game influences. Fans of the genre may be pulled up recognising elements or echoes from genre staples from Altered Carbon to Starship Troopers to Blade Runner to Gears of War. Just as an example, Vak gets around in a series of armoured suits with mirrored helmets that feels like they have come straight out of the video game series Halo. And in video game style, every time Vak loses one suit but gains valuable information he “levels up” to a better suit. The fights themselves, bloody and visceral as they are, sometimes feel like they are descriptions of first person shooters.

For those who like their science fiction violent Stormblood fits the bill. But as the body count mounts, something more interesting emerges. Once the dust has cleared, the space opera elements of the plot come clearer. A plot which starts with multiple species living in a sort of harmony but with an old threat rising, a threat that is tied to the use of stormtech in the first place. All of this lays the groundwork for something much bigger. Leaving Szal with plenty of scope to expand both his universe and his vision and the potential stake out some more interesting territory in the volumes that will surely follow.