Nophek Gloss is a space opera debut and first in a new series from Essa Hansen. The name of the book comes from Gloss, the most valuable substance in the multiverse which is harvested from the brain of a vicious mammalian creature called nophek. This is not the only strangeness in a book that is full of eldritch technology and new xenid (aka alien) species. There is a glossary at the back Nophek Gloss for those who feel confused by lightseep obsidian or can’t remember what a saisan looks like but all is explained and it is more rewarding to go with the flow. 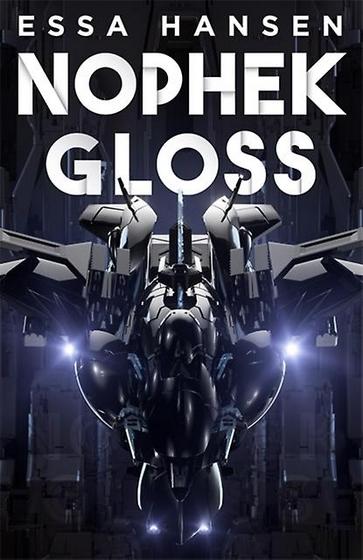 Nophek Gloss opens frenetically. A group of agricultural workers are just coming to terms with the unprecedented death of their livestock when they are rounded up and sent away. There is little time to get a sense of place or character before the violent action kicks in as the workers are confronted by ravenous nophek, an attack which one of those slaves, Caiden, manages to survive. Before long, Caiden has found a fabulous spaceship, has been adopted by a Firefly-style alien crew and learns that he is some kind of genetically bred supersolider. But it takes time for the actual plot to kick in to gear. That plot follows Caiden’s search for vengeance for the death of his parents (who are not really his parents) and sister (who is not really his sister). Given the lack of time we spend with these characters this often feels like ultimate fridging.

There is plenty of standard space opera tropes here – lost advanced civilisations, genetic modifications, huge space station/trading hubs crawling with aliens. This description of Emporia could have come straight out of a number of space opera books or movies:

The Den interior was vast and multi-leveled as the exterior. [Caiden] blinked at colors and lights, surfaces flickering with imagery like windows to other worlds. Tiny ships and darts whizzed in the open air while beings of all sorts milled and streamed and… pulsed.

All of this is embedded in a chosen one/found family narrative. While there are technological explanations, Caiden goes from wide eyed naïf to deadly killing machine (with a heart) in a very short amount of time. He manages to solve a range of problems that other, more experienced characters have struggled with. The crew of misfits and outsiders (all with a blotted past) that Caiden ends up are on the whole more flawed and more interesting and the section of the narrative when he leaves them behind suffers as a result. The crew really provide the heart and soul of this book and while a little generic they are well drawn. They include the grumpy, suspicious captain, to the empathic mechanic, the medic and former best pilot in the galaxy. Many are alien species and Hansen does a good job in creating a range of interesting and believable creatures.

Nophek Gloss is a promising debut. Hansen takes a range of fairly standard tools and tropes and shapes them into a narrative that, when it fires, can be both original and propulsive. There is a fair amount of exposition and descriptions of characters just wandering around that needs to be navigated between those sections.  The epilogue throws the reader ten years into the future and teases a new range of problems for Caiden and his gang in a sequel due in 2021.