Lovers of comedy genre mashups will already be very aware of the work of Simon Pegg and Nick Frost and open to Truth Seekers. They came on to the scene with the series, Spaced, directed by Edgar Wright, in the early 2000s which mixed comedy with a range of science fiction and fantasy standards. The trio of Pegg, Frost and Wright followed that series up with their “Cornetto trilogy” of films – Shaun of the Dead in 2004 (a zombie rom com), Hot Fuzz in 2007 (a police thriller involving a cult) and The World’s End in 2013 (alien invasion). 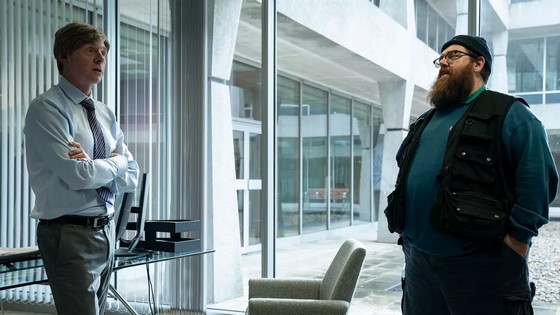 In 2011 Pegg and Frost also wrote and starred in the foul mouthed ET-inspired, Area 51 comedy Paul.  Pegg has gone on to become a science fiction franchise stalwart appearing in Doctor Who, Star Trek, Mission Impossible, Star Wars (The Clone Wars) and The Boys. While Frost has also had his mandatory Doctor Who role (as Santa Claus in a Christmas special) and appearing in plenty genre fare including The Adventures of Tintin and Into the Badlands. So their return to the small screen with a horror comedy series anchored by Frost, with Pegg in a supporting role comes as a welcome surprise.

Nick Frost is Gus Roberts, the best broadband repairman in the South of England, working for a company called Smyle run by Dave (Pegg). But Roberts also has a sideline as a paranormal investigator for an online site called Truth Seekers (an interest which Dave shares). When Gus is paired with a rookie called Elton John (Samson Kayo) – a joke name that pays off later in the series – his encounters with the supernatural start to increase, no more so than when they find Astrid, who is being pursued by burning apparitions. What starts as a “case of the week” format in which the pair, and later trio, investigate different aspects of the paranormal (ghosts, possessed machinery, evil dolls, werewolves) slowly begins to appear to be part of a bigger story. This story, involving Roberts’ dead wife, also pulls in Roberts’ father-in-law Richard (acting legend Malcolm McDowell) and Elton’s agoraphobic cosplaying sister Helen (Susan Wokoma), both of whom give engaging supporting performances.

Frost and Pegg clearly love the genre and have a good understanding of what makes it tick. But walking the line between horror and comedy is a tough one and while Truth Seekers is fun it is unfortunately not as funny as it would like to be. It is occasionally genuinely scary though. And the creators do take time to poke fun at fandom with things like a visit to a fan convention (CovColCosCon) and an encounter with Truth Seekers superfan JoJo74 (Kelly McDonald). The overall conspiracy is a little muddled but putting Mighty Boosh star Julian Barratt in the middle of it is a master stroke.

At eight half-hour episodes, Truth Seekers does not outstay its welcome. The individual stories and engaging characters, coupled with the mysteries that are seeded at the start of the series should be enough to keep most viewers bingeing to the end. Those mysteries are resolved but in a cliffhanger finale that leaves plenty of new questions to be answered if a second series is greenlit.

Given the Pegg and Frost pedigree and the lessons they will have inevitably learnt for season one, any future outing for this crew will be worth a look.