Australian science fiction and thriller author Max Barry goes the full Heinlein in his latest book Providence. Providence is military science fiction with a take no prisoners attitude. It takes readers into an ongoing war with an alien race but also questions whether humanity is really up to the task. 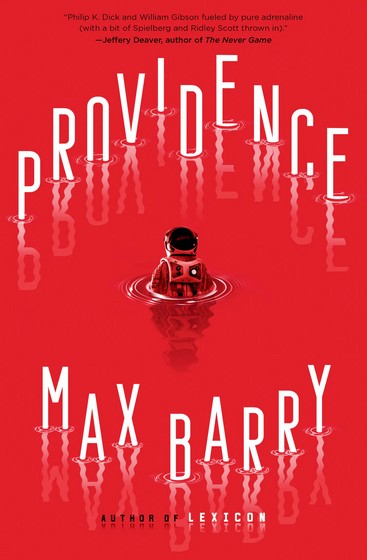 The book opens with humanity’s first encounter with the six legged aliens they come to call “salamanders” and suffice to say it does not go well for the humans. Jump forward seven years and after some staggering losses, humanity has come up with a new weapon in the ongoing war with the Salamanders. Providence starships are huge, but due to their sophisticated artificially intelligent core only need four crew members each.

This book focuses on one such ship and its crew – scarred captain Jackson, gung-ho gunner Anders, puzzle-mad technician Gilly and social media focused Life Officer Talia. As the ship is too complicated to run manually, the four are really only there to keep the seats warm. The trouble really begins when the Salamanders, who constantly find ways to change their attack strategies, find a way to affect the operation of the ship’s AI.

This is military science fiction in the tradition of Heinlein’s Starship Troopers, with nods along the way to the likes of Orson Scot Card and Joe Haldeman. The aliens are implacable, inscrutable, hive minded, relentless and deadly. The humans are spectacularly flawed but know they have a job to do to protect their species. The characters get a little colour but they are essentially from central casting for this kind of tale – including the grizzled veteran still trying to redeem herself and the gun-mad soldier seeking the posthumous approval of siblings who died earlier in the war. And the ultimate resolution relies on characters doing things that do not make a lot of sense and such a huge swag of unbelievable coincidence that it is not really worth thinking about too closely if you want to keep enjoying the tale.

The author’s note at the end of the book goes back to Barry’s high school days to explain why he wanted to write book that not only has a spaceship with huge guns, but guns that are constantly in use. And given Barry’s aim was to deliver this type of gun filled, violent, kill-all-the-aliens-before-they-kill-us, military scifi, he has succeeded.

But military science fiction has come a long way since Heinlein (think Ann Leckie or Yoon Ha Lee) giving this whole enterprise a somewhat dated feel – a throwback to the type of military scifi books that Barry was probably reading when he was in high school. So that Providence is probably best read by those up for some militaristic scifi nostalgia.