Australians who grew up during the era in which Riptides is set may recognize a heck of a lot of their own experiences; the long road trips on rubbish roads, the relentless heat, Bali (even as it was back then), perhaps even turning on the TV at Christmas time to news of the devastation wrought upon Darwin by Cyclone Tracy. 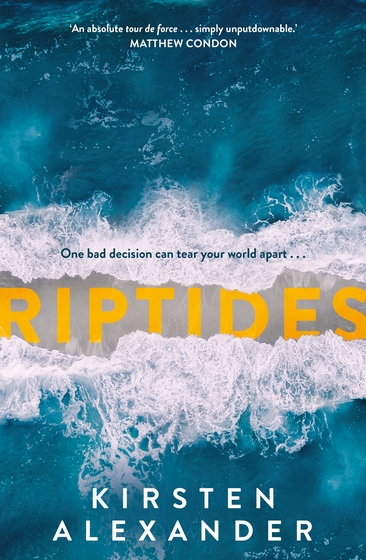 Having managed to guilt her pleasure seeking brother Charlie back from Bali to visit their widowed father at his farm, Abby should have been a bit leery of giving the wheel over to someone who had just come off an international flight.  The drive out to their Dad’s place in the country is considerable, and there’s a storm on the periphery. With the anticipation of facing bridges made inaccessible by rising water levels, the two however push on.

Abby falls asleep in the passenger seat and as Charlie struggles to keep awake, their car begins to cross the white lines. Waking to the scream of a horn from an approaching driver, the siblings are horrified to see a car hurtle off the side of the road and crash as it attempts to avoid their drifting vehicle.  After dragging the young female driver from the wreck, Charlie and Abby are horrified to see that not only is the woman deceased, but that she was pregnant.  Thinking quickly, the two decide to drive on as if nothing has happened. It is the next day when the two learn that the person they drove off the road the night before was their irascible father’s new love.

From here the novel narrates, from the dual point of views of Charlie and Abby, the nerve wracking following weeks endured as they wait for the inevitable axe to fall.  It is never a question of when they will be found out, but more of how much further damage they can inflict in their charged new reality in which there is still the need to navigate all the usual life pitfalls of fraught romantic and family relationships. Kids, friends, neighbours, work – all are still in the mix of one hot summer in Queensland, 1974.

Riptides features subplots of hidden dope plantations, aggressive Queensland cops on the take, children raised in cult-like communities, the style of reportage common in the 1970’s, the dawning of ideals and sensibilities that marked the era as one of such huge societal change.  Riptides is rich in cultural references to how we once were and maintains its terrific sense of place throughout.

Riptides has much to bring to the table as a dramatic work, layering up more complex connections as the action spans outwards from Abby and Charlie and the heartless act that forever binds them in their complicity. Attempting to atone for past sins rarely it seems, results in absolution.

The book does lose a little of its sense of purpose once the huge secret is out, and as with all good dramas, there are characters within that need a good talking to as they meander about.  The female characters make a lot more sense in Riptides, ie Abby is trying to return to study after having too many kids too young, the lush neighbour, the female disciple from the dope growing community that has an unnerving way of not taking no for an answer.  The men go on hare brained schemes, ignoring their responsibilities and the bigger issues that are beginning to become screamingly urgent as time goes on and as one determined cop won’t leave the family alone.

A novel that explores the ramifications of extreme acts of self preservation, Riptides is a compelling read with the beating heart of a shared secret threatening to explode forth and destroy all.

Riptides is the second novel for Australia based Canadian author Kirsten Alexander.  Riptides is published by Penguin Australia.