In essence a chase novel, Shepherd is also a confidently pitched work about something just a little different. There’s not a lot written that is set in this time, being the settler years of Australia, so that alone is something of a literary hook and grab for a young reader to pick up this book. Featuring the voice of a young convict sent out to work in the remote New South Wales outback, Shepherd tells a fine tale of how inner grit and resourcefulness can be applied to any situation, however unfamiliar. 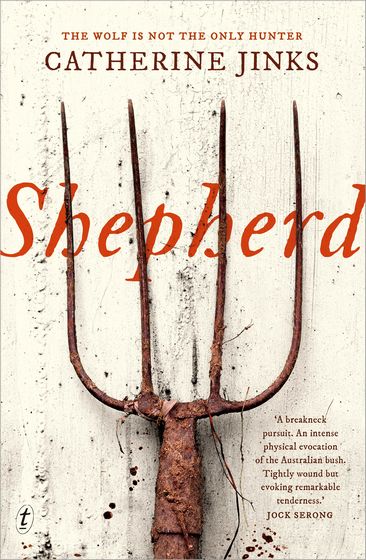 A poacher’s son, twelve year old Tom Clay is well used to tripping carefully about, watching closely for signs of trouble and always remaining unnoticed in the background. Surviving the hellish ride out from Britain in the belly of a convict’s transport trip, Tom still has many harsh challenges ahead.  For virtue of having had some experience with animals, Tom is sent to an isolated settlement farm to look after a flock belonging to one Mr Barrett, a gentleman who holds no patience for shirkers.

Tom’s biggest asset is his ability to coax the best out of the farm’s sheepdogs, and Gypsy, a quick-witted and loyal herder, is Tom’s greatest ally.  Living in a tiny box of a hut with the taciturn hutkeeper Joe Humble, Tom is very aware that being a man down when there is someone out there with a very large axe to grind is not an ideal situation.  The last round of attacks that Tom and Joe had to endure was not from the local indigenous folk or from wild dogs – it was from one of their own.  Carver, who used to work also for Mr Barrett, is still out there somewhere, ready to strike when Tom’s guard is down.  Rowdy, a charming Irishman with few bush skills, soon joins Tom and Joe at the shepherd’s hut to replace the absent Carver. Things aren’t calm for long. Carver hasn’t given up on getting his revenge for being thwarted by a child.

The fact that the narrator is so young and having to take charge of such an awful situation is particularly poignant, with young Tom possessing extraordinary reserves of survivalist techniques and internal fortitude.  Shepherd divides the action between the now and details of Tom’s past, the pullbacks written in after suitable cliff hangers. The bleak circumstances in which young Tom finds himself is not due to his own inexperience or bad decisions, and firms his will to overcome such injustices.

The language of Shepherd is for the most convincingly authentic, but there are notable uncertain clangers that arise.  Not sure if the references to bears, wolves and badgers were meant to be distinctive descriptives to illustrate the unfamiliarity of the animals, so foreign to those Tom would have experienced from his childhood years in Suffolk, but these mentions do jar as you come across them.

Shepherd has a high death count which doesn’t seem remotely strange considering all that we know of the bloody history of Australian’s colonial years, and Tom’s little fictional slice of such a time is a vividly written and electrifying read.  Tom’s insights and motivations may be that of a poor child that no one cares about, but they are so charged, important and compelling.

(Kudos to the cover artist as it is a book sleeve that has demanded attention on many a book shop browse).

Catherine Jinks is an Australian writer who has been awarded many times for her works of young adult and children’s fiction.  Shepherd is published by Text.