As I’ve said in these pages before, I’m a sucker for a good spy story. And, let’s face it, no one does spy stories quite as well as the master, Jon Le Carre. The Little Drummer Girl uses Le Carre’s novel of the same name as its basis, and this limited series delivers simply excellent television.

The Little Drummer Girl is one of Le Carre’s lesser-known novels, possibly because it steps out of his usual Cold War paradigm. Despite that, Warner Bros made it into a movie in 1984, starring Diane Keaton. In hindsight, the movie seems a little superficial in comparison with this long-form series. And like all Le Carre’s works, the intricate details make all the difference. And in the hands of Korean maestro Chan-wook Park (Stoker), the story gets room to breathe and evolve. 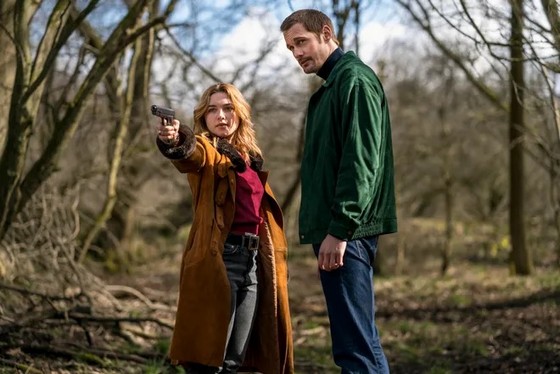 It’s the 1970s. Charlie (Florence Pugh) is a passionate and talented actress with an interest, if not active participation, in radical causes. After a short tour with her theatre troupe in Greece, she attracts the attentions of a man who attended one of the performances. Over a drink, he convinces her he can give her “the role of a lifetime”. The man is Gadi (Alexander Skarsgård), an operative for Mossad.

The “role” is to play the girlfriend of Michel (Amir Khoury). Michel is the brother of Khalil (Charif Ghattas), a leading Palestinian terrorist. Seems Khalil (possibly with Michel’s help) carried out an attack on an Israeli diplomat that ended up killing the diplomat’s young son. Gadi’s boss Martin (Michael Shannon) leads a Mossad team determined to extract vengeance. That means tracking down both the elusive Khalil and breaking up his European network. Martin believes that by implanting Michel’s fake “girlfriend” into the network, they can draw out Khalil. While initially reluctant, Gadi’s charm convinces her to take the first step – delivering a car filled with explosives. The thrill of the “performance” energises Charlie, and despite her misgivings, she agrees to continue the ruse.

The story is loosely based around the real-life Operation Wrath of God, Israel’s covert operations in retaliation for the terror attack on Israeli athletes at the 1972 Munich Olympics. Steven Spielberg’s Munich (2005) provides another perspective on that same operation. But fans of the book should note this adaptation deviates significantly from the novel, particularly towards the end. The series is technically excellent, with some wonderful cinematography from Woo-hyung Kim, complemented by a great score from Yeong-wook Jo. And Sheena Napier and Steven Noble provide some striking 70s-style costumes.

The show treads some fine lines, but delivers a nuanced look at the nature of political action. Charlie, despite her leanings, decides that her craft is more important. By taking part, she has to reconcile a huge range of emotions. Gadi is far more committed, but he has to grapple with the fact his actions put Charlie in serious danger. Although he’s seen war, Gadi still has qualms about the brutality of the operation. While Khalil seems single-minded, some of the other Palestinian characters bring a different perspective. However, predictably no one comes out of this covered in glory.

Three key performances anchor the series. Florence Pugh (Midsommar) is simply riveting as Charlie. She’s the anchor that holds the whole thing together, and does so brilliantly. Alexander Skarsgård (Big Little Lies) brings a subtle but distinct energy to the role of Gadi. And Michael Shannon (Knives Out) provides intensity as Martin, even though his accent is a bit iffy at times. The supporting cast is large and diverse, but they all add to Park’s addictive mix.

The Little Drummer Girl is an outstanding spy thriller. It stands as an intriguing companion piece to the similarly brilliant The Night Manager (also a Le Carre adaptation). And at only six one-hour episodes, it’s ideal for both bingeing and more measured watching, depending on your mood. Don’t miss it.