Adapted from the bestselling novel by American author Celeste Ng, Little Fires Everywhere was another swift and savvy snap up by Hello Sunshine, the media production company owned and founded by actor/producer Reece Witherspoon.  Ng’s fictional drama of motherhood, social expectations and economic divides was optioned for TV even before it hit the bookstores in 2017. 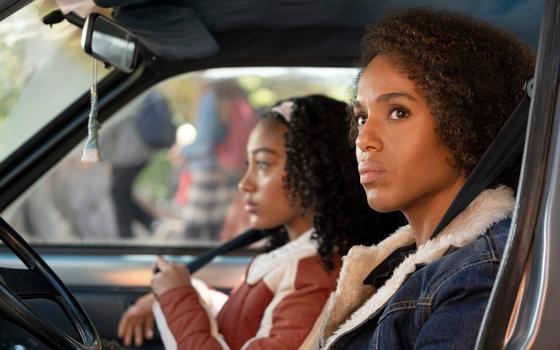 At the beginning of Little Fires Everywhere a house is burning down to the ground as firefighters attend. To the side of this action are the homeowners, one of whom was in the house when the suspected act of arson was perpetrated. The person that the investigators want to speak to most urgently is Izzy (Megan Stott), the troubled teenage daughter of the Richardsons, who has form when it comes to pulling rebellious teenage stunts. But would Izzy go so far as to setting the family home ablaze?

Juggling work and four kids, Elena Richardson (Witherspoon) is a power mother who has channelled energy which might have otherwise been put towards a stellar journalistic career into being instead the most organized parent in her community.  Idealistically considering herself one of those who lifts other women up rather than putting them down, Elena has pause to question her own prejudices when she calls local security on what she believes is a family living in a car nearby.

Single mother and artist Mia Warren (Kerry Washington) has a history of upping sticks and moving house with each new art project, dragging her normally obedient teenage daughter Pearl (Lexi Underwood) along with her.  Pearl has attended a lot of different high schools, and for once the now fifteen year old rebels with the wish of wanting to stay put in Shaker Heights, Ohio.  Their new landlord Elena is a little perturbed at first when she finds out that her son Moody (Gavin Lewis) has formed a friendship with Pearl and has been spending a lot of time at her rental.  Inviting Pearl over for dinner one night, Elena determines that this is one child she could make a difference with.  Izzy, Elena’s youngest daughter, is one mixed bag of misplaced anger and resentment, so for awhile, the opportunity to talk about career choices and colleges with a studious teenage girl is a little gift Elena affords to herself.

Compared a little unfavourably perhaps to the juggernaut that was Big Little Lies (also produced by Hello Sunshine and co-fronted by Witherspoon), Little Fires Everywhere is a less glamorous take on the perils of motherhood that mostly go unnoticed by everyone other than other mothers who are in the trenches alongside. The double load of motherhood and work is weighty here for the character of Elena, who has four kids and a husband (Joshua Jackson), who seems to be putting in minimal effort at sharing the domestic load.  Not a new story, but the back stories and cultural placement of the two mothers is quite different. Their goals however are the same – to protect their children.

As always, Witherspoon brings considerable star power to the production and it is her small adjustments in posture and expression that are most compelling to watch in Little Fires Everywhere. Say what you like about playing again to type, Witherspoon, a past Academy Award winner, knows how to deliver solid performances.

Little Fires Everywhere is however a mildly soapy drama that spends a fair amount of time encouraging its audience to either love or loathe this pitting of mother against mother, almost an unseen war played out in front of oblivious witnesses. The performances of both Witherspoon and Washington are fine, but there is not much of a dramatic script to showcase their talents.  Washington crafts suppressed rage with every line that she so carefully speaks, Witherspoon earnestly expresses her character’s self belief in what makes her a good parent and citizen.

The nuanced relationship that the two mothers experience is the focal point of the show, with one appearing to have all the trappings of domesticity and the other free to express herself without the weight of a large family and community responsibilities.  It would appear that book (which was also a Reece’s Book Club pick, a rubber stamp of approval which guarantees a book its success) did a more nuanced job of suggesting who we are to consider the better mother or better person, but in this television adaptation, its obvious who we are supposed to favour.

For switch off drama that is pleasant to watch and a little conversation starter perhaps with your bookish friends who can be smugly knowledgeable about the source material, Little Fires Everywhere will do the trick in eight episodes.

Little Fires Everywhere was directed by (the late) Lynn Shelton and is streaming now on Amazon Prime.   Witherspoon and Washington also weighed as two of the six co-producers on the show.