In the days before the pandemic (remember them?), hype swirled around Disney’s adaptation of Artemis Fowl, the much-loved YA novel by Eoin Colfer. Originally slated for a (northern) summer release, COVID-19 torpedoed those plans and Disney moved it straight to its new streaming platform, Disney +. In hindsight, that could have been a wise move. This bloated yet oddly thin tale tries to make a case for magic in the world, while at the same time cynically obliterating any semblance of it. 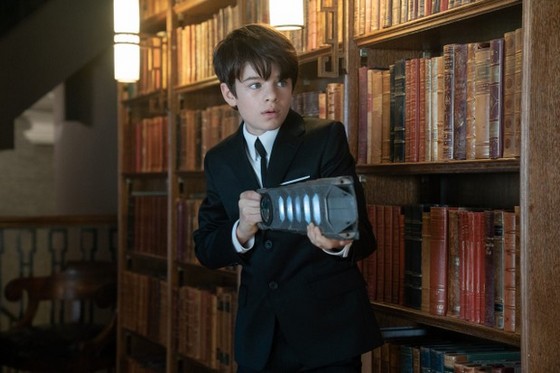 It’s a shame because this long-gestating film features some of Britain’s finest cinematic talent, including director Kenneth Branagh and stars Colin Farrell and Judi Dench. But the screenwriting team of Conor McPherson and Hamish McColl struggle to fit all the moving parts together. The story amalgamates Irish folk traditions into a kidnapping plot. But those folk traditions are largely sidelined in favour of pandering to Disney’s key American tweenager demographic. Anyone familiar with the “old” stories of fairies, leprechauns, goblins and sprites will barely recognise them in this confused blancmange.

Giant dwarf” Mulch Diggums (Josh Gad) narrates the tale. Under arrest for his role in “trespassing” at Fowl Manor, Mulch describes how reclusive genius Artemis Fowl Snr (Farrell) accumulated a massive collection of fairy lore. But his enthusiasm for collecting means his son Artemis Jr (Ferdia Shaw) is often left in the mansion under the care of bodyguard Domovoi Butler (Nonso Anozie). But fate takes a twist when Fowl Snr’s helicopter disappears. The media soon suspects Fowl Snr is up to no good as his disappearance coincides with several significant artifacts going missing. But when Artemis Jr receives a mysterious phone call, it seems shadowy forces are at work. A mysterious dark fairy has kidnapped Artemis’ father. To secure his return, Artemis needs to find something called the Aculos, the most powerful weapon in the magical world.

Meanwhile, in the fairy hub of Haven City, others are seeking the Aculos. The weapon has been taken to the human world and a fairy named Beachwood Short is suspected. Commander Root (Judi Dench) is sending forces to retrieve it. But the suspected involvement of her father sidelines loyal fairy officer Holly Short (Lara McDonnell) from the task. But when an opening arises, Holly jumps at the chance to take on a mission to the human world. But she then takes an unauthorised detour – to Fowl Manor.

While I’m not familiar with the book, I suspect it’s simply too dense to neatly “fit” into a 95 minute movie. Similar to the recent adaptation of The Little Drummer Girl, the broader canvas of a limited TV series might have suited the material better. The events cascade over each other so rapidly, I found it hard to keep track. The obtuse nature of the material doesn’t help.

Ferdia Shaw has to hold the film together, and while he puts in a valiant effort, his character ends up being upstaged. Lara McDonnell fares a little better as Holly but she too ultimately fades into the background. Josh Gad (Murder on the Orient Express) makes the biggest impression – thanks in part to some literally jaw-dropping CGI – adding some much-needed colour and humour. The script however treats Judi Dench (Red Joan) and Nonso Anozie (The Laundromat) quite poorly and they end up quite lost in the confusion.

All the high hopes lavished on Artemis Fowl seem to have come to nought. This messy muddle of a film struggles with the basics – like a coherent plot and engaging characters. So its efforts to capture the essence of Colfer’s book miss the mark. And it proceeds to destroy any magic that might remain.

Artemis Fowl is streaming on Disney +