The Platform (El Hoyo) isn’t just a frightening movie. It’s a movie with a moral. A film that makes you think. Could you call it horror? You could have an extensive discussion about this. For some of the detainees who are locked up in the prison portrayed in this film, it’s indeed horror. It depends on which floor they end up after a month of extensive eating or a month of terrible hunger. The first thing that came to mind was “Hey, they designed a vertical Snowpiercer”. Be warned though. It’s brutal. Confronting. And as I said before, a moral lurks beneath the symbolic surface. 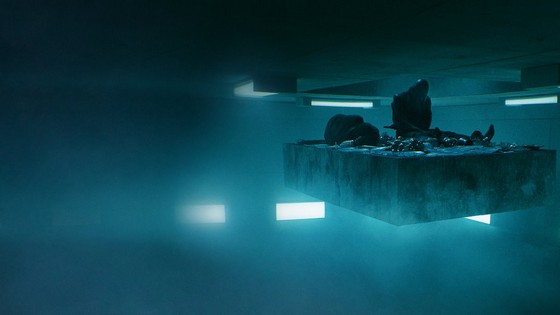 However, the set-up of the film is very simple. Take a sky-high building. A magically moving platform (hence the movie title). A group of convicts who are locked in groups of two on each floor. Finally, you establish a culinary department full of kitchen staff who all master the right culinary skills. And this department ensures that this platform is filled with delicacies every day with the same dose of enthusiasm, dedication, and love for their profession. From roasts, fruit bowls, and enormous chocolate cakes to haute cuisine with langoustines, lobster, and other gastronomically refined food. You can guess the outcome. As the platform sinks, the richly filled table turns into a desolate table full of empty dishes, pots, and smashed dinnerware, where you can’t even find a crumb on anymore.

Despite the simple concept and the fact that the entire film is set in one location, the film remains fascinating until the end. The denouement, however, is rather disappointing. That’s the only thing that put a damper on this film. Not that everything is very clear in this film. Why this facility has been designed in this way, isn’t explained anywhere. Is it to talk a conscience into the viewers? Is it a psychologically justified experiment? Or was there just someone random who came up with this brilliant idea to design this alternative penal institution? Besides, it’s not only convicts who were admitted here. Take Goreng (Ivan Massagué). This person will receive a diploma (as a social worker?) after serving a 6-month prison sentence. Is it a form of an internship? Or self-flagellation? Even the mechanism behind the falling platform remained a mystery to me. But I got no problem with these unresolved questions. Unfortunately, the main question of how the system could be beaten is left unanswered. Or was it just the intention to leave everyone in the dark?

It’s crystal clear they tried to deliver a socially critical message. It’s broadly an allegorical representation of our contemporary society. A society with an unfair distribution of prosperity and richness. And the vast majority of those who own the most wealth in our society, are disinclined to share it with those of the lower classes. And the plea of ​​the less fortunate falls on deaf ears, so they are doomed to rely on less humane practices. And, of course, there are the world-improvers among us and people thinking they are a newborn St. Martin, who make frantic efforts to convince others to participate in working on a better world and to call for solidarity. A fairer world. And mocking laughter and derision are usually the results of their efforts. The only difference with real life is that people change in the social ladder from month to month in this prison. Some in a positive, others in a negative way.

The Platform is a bizarre story that left me with an oppressive feeling. As the film progresses you realize how awful it is for some in this gray, grim tower. And these abject conditions are also explicitly shown. Suffocatingly realistic. So expect some bloody and gory images full of excessive violence as well (not suitable for sensitive souls). For some, the sight of men eating food like animals (which reminded me a bit of La Grande Bouffe), it will be repugnant already. But otherwise, this original film is easy to digest (just to stay with the subject). And not only because of the splendid acting. It’s not without reason that the film is a great success on Netflix. So you can see that this film platform occasionally programs better movies.

The Platform is streaming on Netflix