The original animated version of Dumbo (Disney’s fourth feature film) came out in 1941. It’s now it has been re-imagined in live action form. 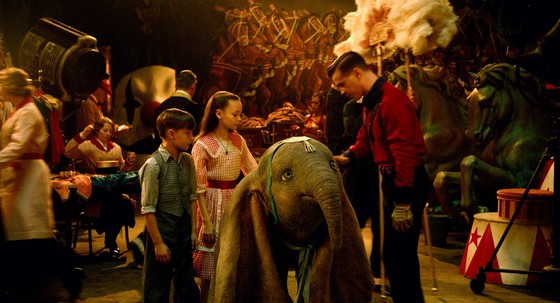 Circus owner Max Medici (Danny DeVito) enlists former circus star Holt Farrier (Colin Farrell) and his children, Milly (Nico Parker) and Joe (Finley Hobbins), to care for a very different newborn elephant. The travelling circus is already struggling when Farrier – who used to do tricks on horses – returns from World War I. He lost an arm, but finds out he lost his wife too while he was away. Now he struggles to connect with his kids.

When Medici asks Farrier to care for a pachyderm with oversized ears, he doesn’t exactly jump at the opportunity. Milly and Joe though certainly do, even though the elephant initially makes the circus a laughing stock. But when they discover Dumbo can fly, the circus is very much back in town, so to speak.

That’s when snide entrepreneur V.A. Vandevere (Michael Keaton) comes a knockin’. He recruits the peculiar creature – and the whole circus troupe – for his newest entertainment venture, called Dreamland. That’s where Dumbo soars to new heights alongside aerial artist Colette Marchant (Eva Green). But Farrier learns that beneath its shiny veneer, Dreamland is full of dark secrets.

The essence of the Dumbo story remains sound, even if this version is stilted at times. I thought there were a number of flat patches in the film, including one near the start. Overall, this new Dumbo wasn’t as magical as it could have been.

Keaton as the cardboard villain was often barely comprehensible. DeVito and Farrell had a number of awkward moments. At times it felt like all three of them were just delivering well-rehearsed lines. Arguably the best things about the picture were Nico Parker as the empathetic daughter; and Eva Green as Colette, a circus performer who appears to have sold her soul.

I expect glamour, excitement and intrigue from Disney, but Dumbo fell short. I’m not convinced Tim Burton was the best choice of director. Incidentally, the screenplay is by Ehren Kruger, who wrote the thriller Arlington Road.

Perhaps children will get more out of it than I did? I hope so.