You’ve probably noticed a rift in the film community between those who despise streaming services and those who embrace them. While some big names are in the “despise” camp, acclaimed director Steven Soderbergh is firmly in the “embrace” camp. After collaborating with Netflix for High Flying Bird, the director re-teams with them for The Laundromat. Despite its prosaic title, this anthology film tells the story of Mossack Fonseca, the real-life law firm behind the “Panama Papers” scandal. But it also delves into the shadowy world of high finance; a world mired in legal fictions, awash with money and tainted by corruption. 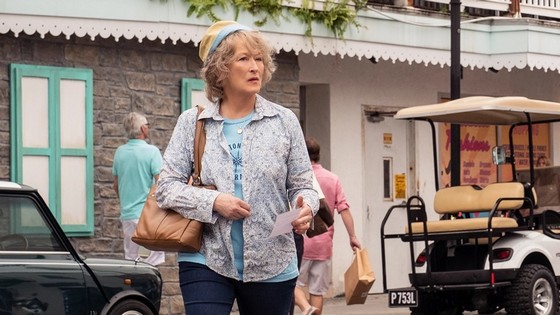 Gary Oldman plays Mossack and Antonio Banderas is Fonseca. They’re a pair of ex-pats who’ve set up a law firm in Panama of all places. They provide the ultra-rich with what they describe in the film as “privacy” – mainly via shell companies, off-shore entities and complicated trust structures. In The Laundromat, they act as a kind of Greek chorus, explaining the machinations of the system, while also appearing as characters in the film. But the main character is arguably Ellen Martin (Meryl Streep). When her husband Joe (James Cromwell) dies in a boating accident, Ellen discovers the byzantine world of insurance. Through a complicated series of companies and documents, it seems the insurers are trying to deny paying out her claim against the tour operator responsible for the boat incident. That leads her to tax havens like St Kitts & Nevis, the British Virgin Islands… and eventually Panama.

I mentioned the film is an anthology, so it doesn’t stay with Ellen’s story throughout. Rather it delves into other aspects of the financial system with other characters. Characters like Charles (Nonso Anozie), a wealthy South African businessman whose lack of discretion invites trouble from the women in his life. And like Gu Kailain (Rosaline Chao), the wife of a Chinese Communist Party official who – perhaps unwisely – engages the services of Maywood (Matthias Schoenaerts) to deal with a delicate matter. These “chapters” illustrate a different aspect of the global finance system, all framed around a series of “secrets” of the system (the opening titles say the film is “based on actual secrets”).

This marks writer Scott Z. Burns’ (The Report) fourth collaboration with Soderbergh. He provides an elegant and innovative screenplay. His script doesn’t just break the fourth wall, it breaks the fifth wall – directly discussing the filmmakers as well as the characters. The past and present are blended in a number of scenes (a nod, perhaps, to Fellini’s 8 ½) and he plays around with both time and space in intriguing ways.

As always with an anthology-style film, some of the “chapters” are more interesting than others. And I found the film’s direct appeals (especially at the end) to the viewer a little weak – maybe even naive. But for the most part, Soderbergh is in fine form here. So too is Meryl Streep (would you expect any less?) as the bewildered but dogged Ellen. Indeed, all the cast are very good; but Gary Oldman and Antonio Banderas steal the show as the dodgy lawyers.

If you enjoyed The Big Short or The Wolf of Wall Street, you’ll likely buy what Steven Soderbergh is selling with The Laundromat. It’s showing now on Netflix.