The Coen brothers are steeped in the lore of Westerns. Even leaving aside their direct remake of True Grit, many of their films – I’m thinking Blood Simple, The Man Who Wasn’t There and No Country for Old Men – tap into the tropes of the genre. So it makes a lot of sense that they’d dive in once more with The Ballad of Buster Scruggs.

This anthology film, perhaps surprisingly, went straight to Netflix in Australia, though it had festival and cinema screenings overseas. The film presents six diverse vignettes of the “Old West”. It’s in no way however a documentary, or even something vaguely historically accurate. Rather, this is a homage to the Western as a film genre; specifically the Western as it was in its heyday from the 1930s to the 1960s. As such, it’s a “traditionalist” Western seen very much through a white American lens; even if the level of violence is ramped up considerably. It’s perhaps what Westerns would have been like if the revisionist movement and, you know, historical study hadn’t happened. 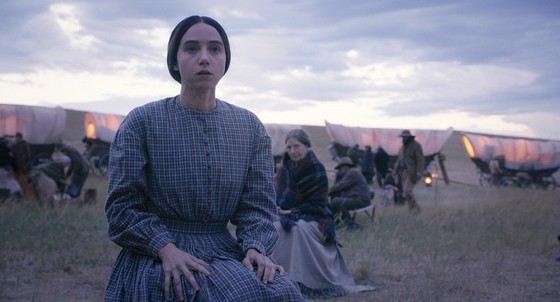 That said, this is a lot darker than many traditional Westerns. The unifying thread in all its chapters is death. The film explores both death’s ubiquity and its inevitability in humorous and shocking ways.

The film uses a framing device of a book, titled “The Ballad of Buster Scruggs and Other Tales of the American Frontier”. Each story opens on a colour illustration in the book, and closes with the final words of the chapter. This is not only extremely clever, but actually works brilliantly.

Everything kicks off with the eponymous short story, featuring Tim Blake Nelson as singing cowboy Buster Scruggs. While he wears a white hat and is quick with a song or witty repartee, Buster is actually a vicious gunslinger. This almost surrealist chapter features one of the crazier scenes in any Coen brothers film. “Near Algodones” sees a would-be bank robber (James Franco) confront a  series of sticky situations.

“Meal Ticket” features Liam Neeson as a travelling showman whose star is the “Wingless Thrush” (Harry Melling), an armless and legless man with a gift for perfectly reciting great poetry and speeches. This chapter features an almost baroque sensibility and a stunning conclusion. “All Gold Canyon” is a contemplation on the environmental impact of Western expansion in the US, and features Tom Waits as a crafty prospector looking for a lucky strike. Next up is the longest chapter, “The Girl Who Got Rattled”. Zoe Kazan plays Alice Longabaugh, a young woman on a wagon train heading to Oregon. Along the way, she suffers both personal loss and a financial predicament. She confides in one of the guides, Billy Knapp (Bill Heck). Initially distant, Knapp soon warms to Alice and devises an ingenious plan to extricate her from her woes. But fate will intervene in an unexpected and tragic way.

Finally, “The Mortal Remains” is set almost entirely inside a stage coach. Two bounty hunters (Brendan Gleeson and Jonjo O’Neill) are accompanying a body into town to claim a reward, to the chagrin of their fellow passengers (Tyne Daly, Saul Rubinek and Chelcie Ross). This is by far the most esoteric of the chapters and features an ending that perhaps hints at the supernatural.

Any anthology film suffers from the inescapable fact that some chapters will work better than others. The trick is getting them to mesh. And the Coen brothers do that brilliantly here. While each piece has its own tone, they fit together to create something more than just the sum of the individual parts.

The performances are – as you’d probably expect – generally excellent. The stand-out for me was Zoe Kazan (The Big Sick); though Harry Melling (the Harry Potter series) is also brilliant. Tom Waits (The Old Man and the Gun) is barely recognisable as the old prospector but makes the role his own. And Jonjo O’Neill (On Chesil Beach) and Brendan Gleeson (Paddington 2) seem to have a lot of fun as the philosophical bounty hunters.

Bruno Delbonnel (Darkest Hour) provides some spectacular cinematography, while the legendary Carter Burwell brings the whole thing to life with his varied score. As noted above, the level of violence is high (it carries an MA rating), so don’t be surprised if the bloodshed gets a little extreme at times.

As a fan of the Coen brothers, I really enjoyed The Ballad of Buster Scruggs. It’s reassuringly familiar yet fresh enough to surprise. If it’s your introduction to the Coens, you might find it all a bit bewildering; but if you know their work, you’ll probably lap up this diverse homage to the classic Westerns.

The Ballad of Buster Scruggs is now streaming on Netflix.