Growing old isn’t for sissies, they say. Netflix’s excellent series The Kominsky Method proves the axiom; but does it in a remarkably empathetic way.

Television legend Chuck Lorre is behind the series. Apart from the behemoth that is The Big Bang Theory, Lorre produced series like Roseanne, Dharma & Greg and Two & a Half Men. Unlike those shows though, The Kominsky Method has no laugh track or wacky physical comedy. Instead, Lorre (and screenwriters Alan J. Higgins and David Javerbaum) prefer a more thoughtful approach. 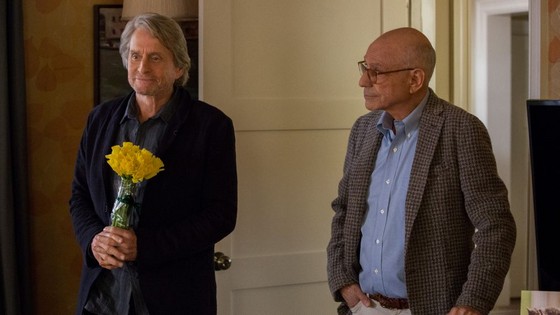 The show goes to some pretty dark places. Over the first season (8 eps) it touches on grief, drug addiction and self-harm. That’s even before it goes into the difficulties of ageing. So don’t go in thinking this is going to be a fluffy comedy. The show gives plenty of humour, it’s just quite bleak humour at times. It delivers a barrage of one-liners – even full-on “dad jokes” – but the humour punctuates the show’s darker themes.

The Kominsky of the title is Sandy Kominsky (Michael Douglas), an LA acting coach who runs a private acting studio. Norman Newlander (Alan Arkin) is Sandy’s best friend – and sometime agent. When it gets right down to it, The Kominsky Method charts the relationship of these two men. In a way, they’re similar – stubborn, proud and a little vain. But things change for each of them in dramatic ways. For Norman, it comes with the death of his wife Eileen (Susan Sullivan). For Sandy, it’s the chance of a new relationship with Lisa (Nancy Travis), a woman his own age who’s decided to take up acting. These changes will have profound impacts for both men; largely because they’re both so set in their ways.

The Kominsky Method shot to prominence earlier this year when it won Best Comedy TV Series at the Golden Globes and TV Program of the Year at the AFI Awards. And while you can question whether the make-up of the voters may have had an impact on those awards, the show has been a critics’ darling. And it’s easy to see why. It features sharp writing, great acting and assured direction. I guess it helps that it’s (kind of) about Hollywood too; but these characters work on a more human level. It’s not The Player. More a drama about people who happen to work (peripherally) in the movie business.

Alan Arkin and Michael Douglas lead the cast with all the gravitas and good humour you’d expect. These are exceptional actors, and they make the material sing. The supporting cast are relegated to second fiddle somewhat; but Nancy Travis (Last Man Standing) does a fine job as Lisa. Sarah Baker (Big Little Lies) and Lisa Edelstein (House) both impress as Mindy Kominsky and Phoebe Newlander, the respective leads’ very different daughters.

I started warily with The Kominsky Method. Initially I thought it looked like a Golden Girls with men. But I was wrong. This show takes its audience into interesting territory – sometimes hilarious, sometimes touching and sometimes a bit weird. And that alone makes it a cut above many other TV comedies. But its heart takes it to another level. You can find it on Netflix.