In this current golden age of television*, the dark comedy has really come into its own. “High-concept” shows that would never have flown on network TV get a chance on streaming. I, Zombie probably led the way for the current batch; but more recent series like Santa Clarita Diet demonstrate the format’s potential. Perhaps sensing something in the water, Netflix produced the quirky but very dark Dead to Me. And it’s a winner. 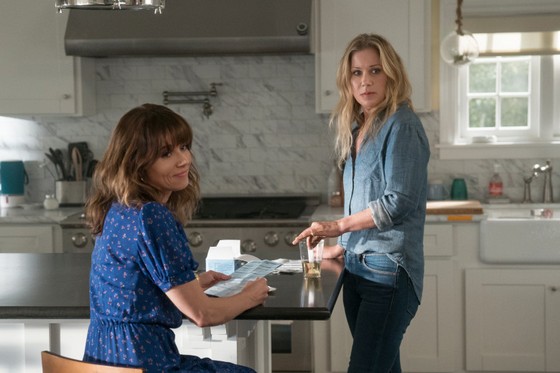 No, it’s not about zombies; but it is about death. Specifically it’s about grief and what grief does to those left behind. Sounds cheery, right? Well the show is a lot funnier and more perceptive than my brief descriptor suggests. Creator Liz Feldman knows her way around comedy, having been a producer on the long-running 2 Broke Girls (which I didn’t care for) and the short-lived Hot in Cleveland (a much better show). Dead to Me allows Feldman and writing collaborator Kelly Hutchinson room to try things out; and they mostly succeed.

In the pilot, we meet Jen Harding (Christina Applegate). She’s a successful realtor in Los Angeles. But she’s grieving the loss of her husband who was killed in a hit-and-run incident. Now she has to deal with her own emotions and raise her two sons, Charlie (Sam McCarthy) and Henry (Luke Roessler) while keeping her business going. Oh, and she’s taken it on herself to track down the driver responsible for her husband’s death. Feeling overwhelmed, she decides to attend a support group. There she meets the slightly flaky Judy Hale (Linda Cardellini). Judy too is suffering a loss, though the true nature of it doesn’t emerge immediately. But despite Judy’s eccentricities, Jen feels a connection. Soon the two are firm friends. Judy even moves into Jen’s granny flat. But Judy harbours some dark secrets…

The key dynamic, obviously enough, sees the clear-eyed Jen bumping up against the flighty Judy. While it’s hardly new (The Odd Couple, anyone?) the conflict isn’t played merely for laughs. The script is far too clever for that. Rather, Feldman and Hutchinson want to explore the nature of grief with a mix of humour and empathy. That comes through particularly in the character of Judy. Lesser writers would have made her a stereotype, but Feldman and Hutchinson delve into the many facets of the character without judgment. The show also veers occasionally into soap opera territory, but the strength of the writing ensures it never descends into mawkishness.

Christina Applegate (Bad Moms 2) brings a winning mix of hard-edged determination and soft-edged vulnerability to her role as Jen. The way she conveys the character’s bottled-up emotions is brilliant. Linda Cardellini (Green Book) gets a chance to spread her acting wings as Judy. The supporting cast includes James Madsen, Max Jensen and Valerie Mahaffey. Look out for TV legend Ed Asner as a prickly resident in an aged-care home.

If you like your TV comedies fluffy and predictable, then Dead to Me might not be for you. But if you’re a fan of darker, more challenging fare, then you should definitely give this a go.