More of the same … with a twist. That’s what you’re in for with Bad Moms 2, the follow-up to last year’s original.

What Bad Moms’  leading ladies Amy (Mila Kunis), Kiki (Kristen Bell) and Carla (Kathryn Hahn) represented was freedom. Freedom to mess up. Freedom to do the best you can and still mess up. Now Bad Moms 2 is here to bring that same “real mom” spirit to the festive season. Writer/directors Jon Lucas and Scott Moore are back for this second instalment. 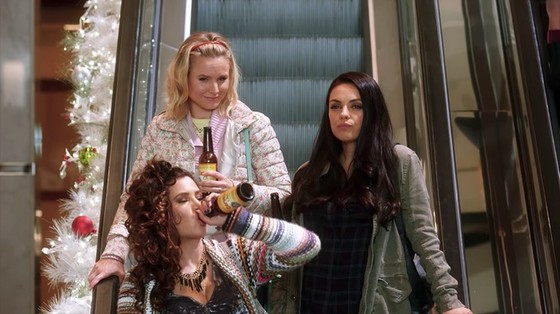 This time around, the women receive a visit from their own mothers, roles portrayed by Christine Baranski (as Ruth, Amy’s mum), Cheryl Hines (Sandy, Kiki’s mum) and Susan Sarandon (Isis, Carla’s mum). As if the  holiday season isn’t difficult enough, having to juggle Christmas cheer with entertaining their mothers proves positively ridiculous.

Further complicating things, this Christmas Amy and her new(ish) boyfriend Jessie (Jay Hernandez) are blending their families. She’s determined to make the holidays a hit at any cost. Four small children are enough to drive any woman crazy and Kiki is no exception. She does her best to find a balance between child rearing and spending “special” time with her husband. Ruth however is a perfectionist who loves Christmastime. She considers the holidays a competitive sport.

Sandy has lost her husband and hasn’t really found her way since. She focuses all her love and adoration on Kiki, but isn’t been able to maintain healthy boundaries. She’s clingy and overbearing.

Isis has a carefree stoner spirit like her daughter … and then some. Passing a joint or sharing high-heeled boots, whatever the circumstance … the apple bong hasn’t fallen far from the tree.

Let’s face it, we’re dealing with relatively thin fare here. Kunis remains the most credible actress among the three originals. Some of the humour is bawdy and pushes the envelope.

Introducing the central players’ mothers – all of whom are hard work and therefore “Bad Moms” in their own right – is a nice touch. Some of the episodes involving mothers and daughters work better than others.

Overall, the attempted comedy is uneven, with several flatter patches and wanton silliness. Bad Moms 2 felt unnecessarily drawn out, but remains good-natured throughout. Importantly, you can appreciate (or not) what is on offer, without having seen the first one.