Ever since Jaws made us afraid to go into the water we’ve had any number of monster films featuring a variety of killer creatures, from sharks to killer whales to grizzly bears to rats, spiders, snakes, piranhas, and even crocodiles that all played on our fears of nature and predators. In 1980 we even had Alligator, a gruesome killer reptile B-grade horror film, written by John Sayles, in which a 36-foot long alligator lurking in the sewers beneath Chicago made its way to the surface. And now we get a film that features alligators – lots of alligators – those terrifying alpha predators that look prehistoric and which inhabit the Florida everglades. 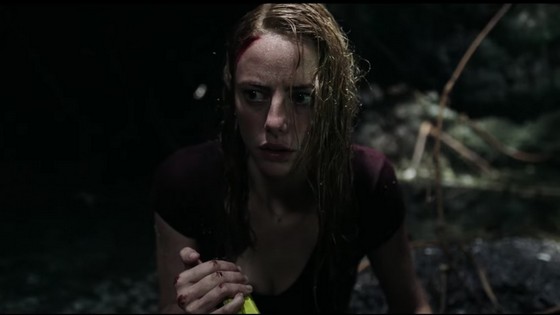 Crawl has been written by Michael and Shawn Rasmussen (The Inhabitants) who obviously know the tropes of this genre, and delivers plenty of suspense and gore. The film takes place in southern Florida during a force 5 hurricane. Former swim champion Hayley Keller (Kayla Scodelario) heads through the pouring rain and fierce winds to check up on her estranged father Dave (Barry Pepper), who was also her former swimming coach.

When she arrives at her former childhood home she finds Dave trapped in the dingy basement where he has been wounded and trapped by a large alligator that has found its way into the house through a drain pipe. Trapped in the basement by alligators and rapidly rising flood waters, Crawl becomes an intense tale of survival as Hayley and Dave work to escape their predicament without being devoured.

Crawl is essentially a two-hander as both Hayley and Dave try to survive the predatory alligators. A few other minor characters, like a couple of deputies and a couple of looters, also turn up, mainly to become victims of the alligators swarming in the rising waters outside.

French director Alexandre Aja (The Hills Have Eyes) makes the most of the confined and claustrophobic setting and ramps up the white knuckle tension. Obviously films like Jaws, The Shallows, etc, are a main reference point for Aja in creating the look and feel of Crawl. Hayley’s drive through the storm initially sets up the sense of foreboding that Aja delivers on in spades once she reaches the house where most of the action occurs. There is some great production design that creates the basement with its leaking pipes, creaking walls and gloomy interior.

The film has been nicely shot by Maxime Alexandre (Aja’s regular cinematographer who shot films like High Tension). The complex father/daughter relationship adds emotional depth to the story and allows some moments of respite as they work through their past history.

The special effects and CGI effects that create the alligators are superb and bring these scaly scary predators to life. Aja also delivers enough bone crunching gory bits to satisfy fans of the genre.